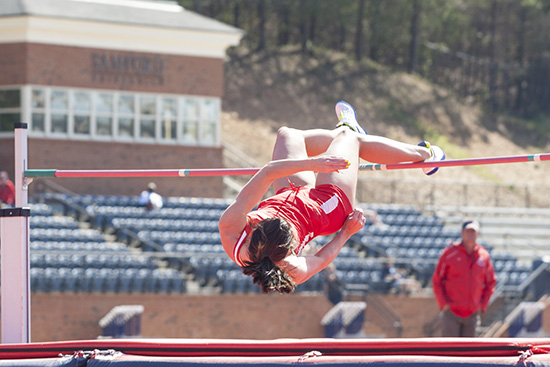 Samford University is hosting the 2015 Southern Conference outdoor track and field championships April 25-26 at the Samford Track and Soccer Complex.

And, as the outdoor track and field season nears a close, there is only one goal on the minds of the student-athletes and Samford head coach Rod Tiffin: to repeat as Southern Conference champions. However, the Bulldogs’ mentality going into its biggest meet of the season remains the same as the approach they have maintained this season.

“Our preparation (for the SoCon Championships) is how we prepare for every meet. It’s nothing that we do any kind of special prep for. We try to keep it just like every other week and every other competition because we don’t want it to be something overwhelming for our student-athletes. We hope everything comes together this week and that we’re at the right place at the right time,” Tiffin stated.

The defending outdoor SoCon champions come into this weekend’s meet as legitimate competitors from top to bottom. The ‘Dogs have compiled a solid record against the nation’s top competitors throughout the outdoor season. The Bulldogs have also shattered school records, meet records and personal bests in the process.

Individually, the Bulldogs have been led by several freshman standouts. Among the list of honors and broken records, four freshmen have been selected as SoCon Athletes of the Week and four have broken school records this season.

Top underclassmen performers include redshirt freshman Tray Oates and native Frenchman Arsène Guillorel. Oates was selected as SoCon Field Athlete of the Month in March for his top vaults at the Alabama Relays which tied a Samford record. Guillorel notched a first place finish at the Florida Relays in the 5,000 meter against top SEC competition while obliterating a previous school record by almost 23 seconds.

On the women’s side, freshman phenom Sarah Sanford has continued to produce for the Bulldogs. The hurdler was selected as SoCon Track Athlete of the Week in her first collegiate outdoor meet by setting a personal best and a meet record in the 400 meter event at the I-65 Relays.

Tiffin considers the quality production by the squad’s freshmen as the highlight of the outdoor season. “We’ve had a lot of young freshmen that have really stepped up and did what we recruited them to do and what we’ve expected them to do.” Tiffin continued. “They’ve really done well for us. I think that’s been the biggest point for me this year is our young people being able to step up and take responsibility and take the roles that we had hoped that they would.”

The Bulldogs are anchored by their upperclassmen who have consistently contributed to the successful squad. Junior Brandon Hazouri was selected as SoCon Track Athlete of the Month for his league best time at the Alabama Relays in March. 2014 national qualifier and All-America Honorable Mention Adam Jones contributed to the ‘Dogs this season through his meet-record mile time, garnering him league athlete of the week honors. Also contributing was redshirt senior Sidney Jordan who tossed a SoCon best for his discus and hammer throws at the Florida Relays.

Despite the individual successes the ‘Dogs have enjoyed, Tiffin asserts the key to repeating as SoCon champions lies in the team aspect of an individualized sport and an overall underdog mentality.

“I think the key to winning the SoCon is going to be us being together as a team. I think that’s going to be the biggest thing to pull us through this weekend. If we’re lucky enough to win another championship, it’s going to be doing it as a team and not as individual groups and as individual people.” Tiffin explained. “That’s the way we were able to put it together last year, everyone being really supportive of each other and holding each other accountable and not wanting to let their teammate down. That’s the only way we can be successful again this year.”

Tiffin closed with, “I hope they come in as an underdog in their minds again. That’s the way it is for me: we’re always an underdog. We hope we come in as the underdog ready to fight for everything we can get.”

The Bulldogs are primed for a successful meet this weekend if they maintain their team mentality and individual success.

Laura Klein is a writer for Samford Athletics Communications.