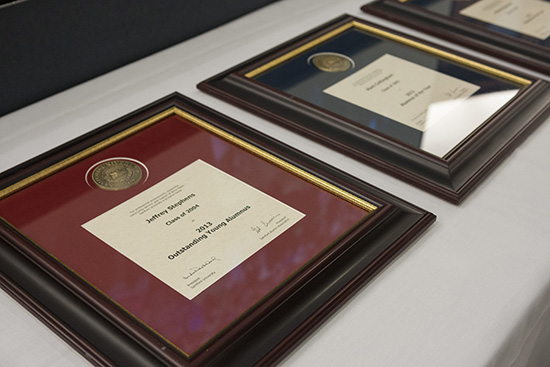 Samford University will honor four outstanding graduates with alumni awards during Homecoming weekend Nov. 6-8. The four will be recognized at the homecoming banquet Nov. 6 and at other events during the weekend.

Cox is a dentist in Phil Campbell, Alabama. He was a student-athlete and member of the 1971 championship football team while at Samford. He serves on the Samford athletics department’s executive council and was honored in 2012 with the Southern Conference Distinguished Service Award. His son is a 2000 Samford graduate.

Karen Carlisle earned a bachelor’s degree in biology at Samford and is a physical therapist and homemaker. She has been active with the Samford Legacy League, the Samford Alumni Association and the Samford Parents Association, as well as other community endeavors. The Carlisles are parents of three children, including two daughters who are current Samford students.

Todd Carlisle is chief executive officer for the Birmingham law firm Sirote and Permutt PC. He serves on the Howard College of Arts and Sciences Advisory Board and is the public representative on the board for the Southern Association of Colleges and Schools Commission on Colleges, the regional accrediting body for higher education. He earned an undergraduate degree from Samford in 1988 and his law degree in 1991.

Patterson is part of the 10-year reunion class and is a principal and executive vice president for the Birmingham commercial real estate development company Shannon Waltcheck. He recently was named to the Top 40 Under 40 List by the Birmingham Business Journal. Patterson serves one of the Brock School of Business advisory boards.

“We are grateful to these individuals, who are so deserving of these awards, for their service to and love of Samford,” said Gil Simmons, Alumni Association president. “They continue to represent our alma mater in such positive, exemplary ways and we are proud to call them fellow alumni.”

Alumnus/alumna of the year is the highest alumni honor the university bestows, according to Molly McGuire, Samford’s director of alumni programs. Recipients are nominated by members of the Samford community and selected by a committee of Samford Alumni Association representatives and university administrators. Honorees are distinguished in their professional careers, community and church involvement, and in their ongoing service to and financial support of Samford, McGuire added.

The Outstanding Young Alumnus Award was inaugurated in 2009 to honor a graduate from the past 10 years for outstanding professional achievement, community and church involvement, and ongoing service to and financial support of Samford, McGuire said. Patterson is the ninth recent graduate to be recognized.

The four honorees will be featured in the fall issue of Seasons, Samford’s news magazine.