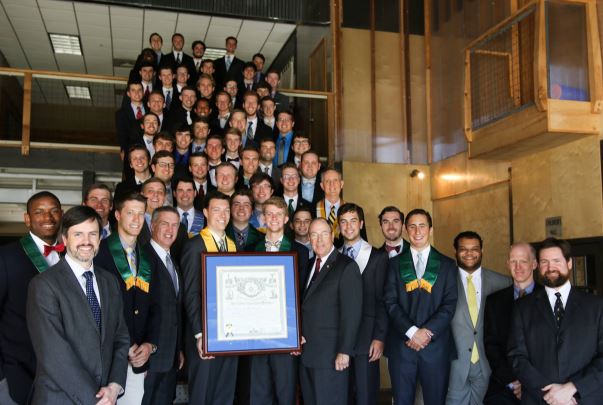 On March 28, alumni and active members of neighboring ATO chapters from Auburn, Alabama, Ole Miss, UAB and University of North Alabama assisted in initiating the 53 Samford members and later joined the founding fathers in a celebration ceremony of their charter and of the 150th anniversary of ATO.

“As alums and advisers, we loved seeing the enthusiasm that the young men showed when they finally received their charter,” said Teddy Champion, chapter adviser. “It's been a long process, but they have earned it, and we are optimistic that the chartering process itself will be the basis for a strong work ethic in the future.”

“I am overwhelmed by finally reaching the end of this process, but I know that receiving our charter is only the beginning of what is to come from our chapter,” said William Hargrove, Kappa Rho president. “Though in many ways this could be an opportunity for us to sit back and be content with what we have done, we will continue to push forward and progress as leaders in [Samford’s] greek community.”

ATO was founded at the Virginia Military Institute in 1865 upon Christian values and ideas of peace and reconciliation throughout the country after the Civil War. According to the organization's website, it is widely recognized for both service and leadership initiatives and has more than 250 active and inactive chapters with more than 6,500 undergraduate members and 200,000 total members.