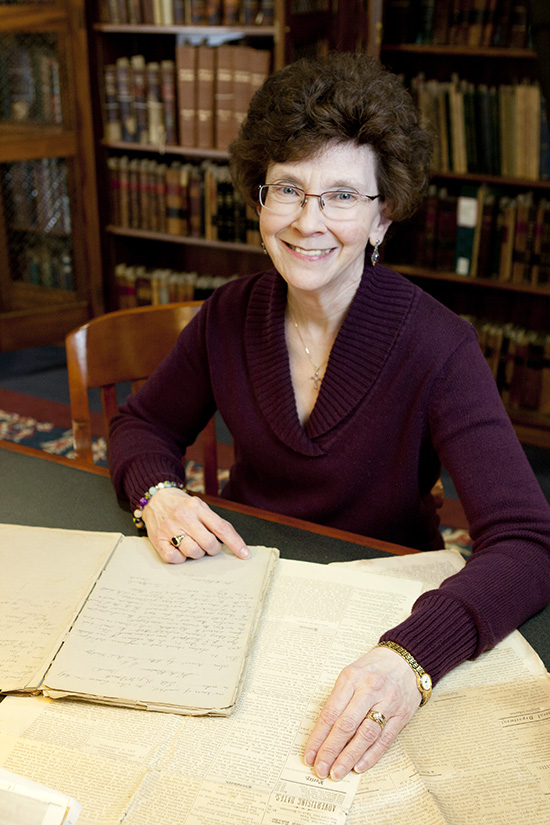 Samford University archivist Elizabeth Wells was awarded the Virginia Hamilton Award by the Alabama Historical Association (AHA) at its annual meeting in Mobile April 9. The award is presented every other year to honor contributions that promote appreciation and better understanding of Alabama history among the general public.

Wells has been processing archivist in the Special Collection and Archives department of Samford’s University Library since 2013 after serving as chair of the department for 38 years. She joined Samford in 1974.

"Receiving the Virginia Hamilton award from the Alabama Historical Association is just one more reminder of Liz Wells’ sterling record of public service and the meaningful contributions she has made to Samford, her profession, and the state of Alabama," said Samford Provost and Executive Vice President Brad Creed, who serves on the AHA board of directors.

Wells was the recipient of Samford’s Jennings Marshall Award for significant service to the university in 2012 and of the Marvin Yeomans Whiting Award from the Society of Alabama Archivists for significant contributions to the preservation and dissemination of local history in Alabama in 2013.

The Virginia Hamilton Award is named for the historian and author of biographies of Hugo Black, former member of the U.S. Supreme Court from Alabama, and Lister Hill, longtime senator from the state. Hamilton, who served as head of the history department at the University of Alabama at Birmingham, also wrote Alabama: A History, part of The States and the Nation Series, and other books.