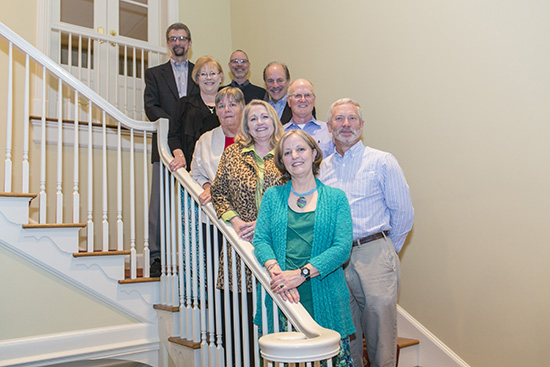 At the time, little did the 19 Samford University students and one director of religious activities know or suspect that a Jan Term trip in 1975 would be so long lasting and effective. Even though they had prepared well, including a series of lectures on the biblical basis for missions by the late religion professor W.T. (Dub) Edwards, and what they might encounter in an inner-city setting by Betty Bock, now retired and living in Missouri, they continue to be inspired by what is happening.

The “Graffiti Gang,” as the group became know, met on Samford’s campus recently for a 40th reunion. Ten years ago, on the 30th anniversary, the group met at the original site in New York.

“We were each humbled during our time in New York 40 years ago, and we continue to be humbled when we read about the growth of the Graffiti Ministries,” said Paul Garrard of West Virginia, one of the original mission members who attended the recent reunion at Samford.

“The lives that have been and continue to be so positively impacted by Graffiti are clear evidence that God was with us then, and that He continues His presence now, not only in New York where it all started, but in other cities as well,” he said.

And, the results have been personal as well, according to Garrard.  “On a purely selfish note, I am humbled each and every time I see these remarkable people with whom I was so privileged to serve 40 years ago, and that have helped shape my life every day since.”

On the eve of the 40th event, original members Dick Bodenhamer and Lynn Smith, both Birmingham residents, reminisced about the experience.

“We planted a seed and walked away,” Bodenhamer said of the original mission.  Reflecting on the 40th anniversary he said “the reunion went well and helped us to reconnect with old friends. I wished the entire mission team could have all been there.”

“Forty years ago, it was not even a church,” Smith recalled. “It was a ‘hell hole’ on the Lower East Side near Alphabet City. We painted, cleaned, reworked it, built a puppet stage and prepared it for a weekday ministry.”

Reby Fisher Lawler of San Antonio, Texas, shared that the mission experience played a big part in her call to the ministry. She recalled how that she heard a woman at a retreat share that she first heard about Jesus at Graffiti Church. Lawler recently retired after a 40-year ministry to children and women at Trinity Baptist Church and Shearer Hills Baptist Church in San Antonio.

An original letter to a parent by Esther Burroughs, Samford’s director of religious affairs at the time, brought a moment of nostalgia, at least to Bodenhamer, who had discovered it recently in his mother’s memorabilia after she had just passed away.

Burroughs concluded her letter with this paragraph: “This is a tremendous undertaking, but already so many things have taken shape and God has surely been leading us. So we go with anticipation and assurance. I especially thank you for sharing your ‘special’ young person for this mission trip.”

The mission trip? Renovate a store front and prepare it for a community center. It had no name but was located in the drug-controlled culture of Alphabet City on Manhattan’s Lower East Side. Suspecting that it would be used as a place to paint graffiti, the students painted a large sign which wrapped around the corner of the building with the word GRAFFITI as part of the art. Shortly thereafter, it became known as Graffiti Church.

What has happened at Graffiti as a result of that mission trip can only be described as miraculous. Now a church, Graffiti Church is being led by Taylor Field, who has been pastor since 1986. An author of several books, Field has a master of divinity degree from Princeton Theological Seminary and a Ph.D.  from Golden Gate Baptist Theological Seminary.

“How many ways can you say ‘thank you’,” Field said of the students who came from Samford 40 years ago to begin the ministry. “See how God can use you in just 10 days to change a city.”

Both Field and a member of the original group said the purpose for the 40th anniversary is “reconnecting, to stay in touch.”

In the past 15 years, according to Graffiti Church’s website, the ministry had the one church which conducted 20 ministries. Today, the church has assisted in some way in helping start 20 new churches.

Thirteen of the students attended the 40th anniversary event. It began with dinner at Samford President Andrew Westmoreland’s home and concluded with a vespers service in Samford’s Reid Chapel on Sunday morning. The program included a message from team members Reby Fisher Lawler and Jim Gamble along with a conference call with Graffiti pastor Field. The group also gathered at homes for fellowship and reminisces and took a tour of the Samford campus.

“The weekend was wonderful and incredibly meaningful,” Smith said.

According to Taylor, Graffiti Church will mark the 40thanniversary June 12-14 with a series of events, including a banquet in Yankee Stadium.
Samford is a leading Christian university offering undergraduate programs grounded in the liberal arts with an array of nationally recognized graduate and professional schools. Founded in 1841, Samford is the 87th-oldest institution of higher learning in the United States. The Wall Street Journal ranks Samford 1st nationally for student engagement and U.S. News & World Report ranks Samford 66th in the nation for best undergraduate teaching and 104th nationally for best value. Samford enrolls 5,683 students from 47 states and 19 countries in its 10 academic schools: arts, arts and sciences, business, divinity, education, health professions, law, nursing, pharmacy and public health. Samford fields 17 athletic teams that compete in the tradition-rich Southern Conference, and ranks 3rd nationally for its Graduation Success Rate among all NCAA Division I schools.
Director of Communication
Holly Gainer
Hgainer1@samford.edu
912-344-8443