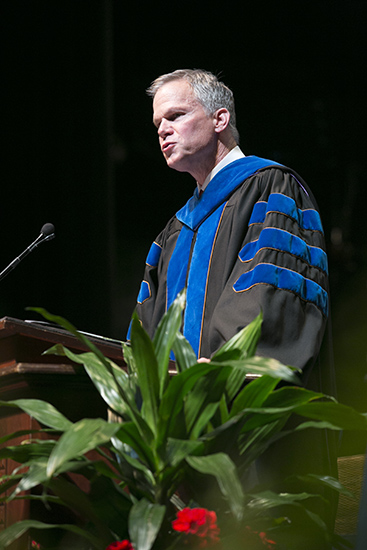 Samford’s Howard College of Arts and Sciences presented 214 undergraduate and graduate degrees May 16.

Dr. J. Bradley Creed, Samford Provost, Executive Vice President and Professor of Religion, addressed the last of Samford’s seven spring commencement ceremonies as one of his last acts at Samford before becoming president of Campbell University in North Carolina.

Howard College of Arts and Sciences dean David Chapman introduced the man who, through 14 years of service, “has shown his unequivocal support for the liberal arts mission of our university.” “He has taught in our religion department, our core curriculum program and our university fellows program.”

Creed joked that he took his address text not from the Bible but from “the Book of Westmoreland, chapter five, verse 16,” as he echoed Samford president Andy Westmoreland’s frequent reminder that “we sit in the shade of trees we did not plant.” “We all are beneficiaries of the contributions, generosity, and support of someone besides us,” Creed said. Gratitude for that, he said, “is the indispensable discipline for living a life that is less frantic and fractured, for making your life journey a pilgrimage of hope and wholeness."

If grateful people sit under trees they did not plant, Creed said, “great people plant shade trees that they’ll never sit under.” "It’s time to do something productive that will bless others, even if you don’t get credit for it or reap the benefits.” Creed said that selflessness and the ability to honor commitments, even in adversity, will mark the graduates as people of character.

Creed related the story of an acquaintance who felt called to befriend people in nursing home. Among those he visited, one woman rebuffed his attention until he promised that he would never take anything from her. The pair finally became friends not long before her death. When the nursing home manager gave the man a check for $30,000–a gift from the woman’s estate–the man used all of that money and some of his own to create a chapel in the nursing home in her honor. The manager then presented the man with a letter from the woman, withheld according to her wishes until her friend had passed along her gift. In her last words to her friend, she thanked him for keeping his promise.

Such opportunities sometimes arise in defiance of our expectations, plans or wishes, Creed said. He noted that his own journeys to and from Samford began with phone calls from strangers. “Be open to alternate routes, unplanned passages, and journeys whose destinations are unchartered and whose ends are now occluded by mystery,” he said. “The most important things are right here in front of you. They will unfold and manifest themselves if you live faithfully with the uncertainties of life and stop thinking that you have to go somewhere exciting or do something memorable to experience the wonder and joy of life. Instead, plant a tree.”

After Creed’s address, Westmoreland called him back to the lectern with his wife, Kathy Harton, and named them Alumni Honoris Causa for their service to the university and community. The president noted that the Creeds will return as Samford parents when their daughter Carrie Grace enrolls as a freshman in August.

Biology major Kendall Brooke McPheeters of Owens Cross Roads, Ala., earned The John C. Pittman Spirit Award, which honors the 1944 alumnus who served on the university’s board of trustees for 62 years. Mr. Pittman passed away April 25, but his son David, daughter Carol Pittman Mitchell and nephew Randy Pittman were present to honor McPheeters for consistently exhibiting exceptional Christian character in community life.