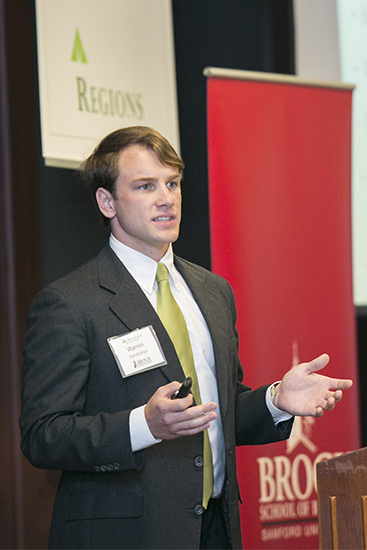 Handrahan, a junior from Mountain Brook, Alabama, took home the top prize of $7,500, which he plans to use to grow his business, in the 7th annual competition. He started the commercial and residential landscaping company as a part-time venture to help pay his transportation expenses, and he named it Specialist Landscaping because he plays a specialist position—kicker—on Samford’s football team.

Second place prize of $5,000 in the Open Division went to ZenVerse, a social media business that will allow users to post and search for quotes on the website. Richard Greene, a Brock School finance major, and Josh Floyd, an accounting major at the University of Alabama at Birmingham, plan to launch the site this summer.

The third place winner, with a $2,500 prize, was Zion Designs, a company that sells Christian-themed “flash tattoos.” Lauren Bender and Caroline Jenkins, juniors from Palm Beach Gardens, Florida and Maryville, Tennessee, respectively, started their business as a class project in a junior-level entrepreneurship class where each student receives a $100 loan from the Brock School. They initially sold their tattoos around campus, but they have also received inquiries from Christian merchandise retailers interested in carrying products they are currently developing.

Jenkins noted, “The Regions New Venture Challenge has been an incredible opportunity. Not only have I been able to hone my business writing and presentation skills, but I have learned I am capable of creating a small business. This competition has given me confidence to expand my career horizons and seek out more entrepreneurial paths.  Through this competition we have also met incredible business mentors that will serve as vital connections.”

Regions Financial Corporation has supported the business plan competition every year since 2008, through funding awards and hosting the finals. Students first compete in a semifinal round to reach the finals in the competition, which has two categories: the BUSA 100 Division, for first year business students and the Open Division for upperclassmen, Master of Business Administration students and recent graduates. Along with the cash awards, winners from the Open Division are also invited to be residents of the Brock School of Business Student Incubator.

Three teams in each division make it to the finals each year and present to executives who are highly regarded in the business community. Ty West, Birmingham Business Journal, Wendi Boyen, Regions Financial Corporation, and Dan Pahos, Home Instead Senior Care and Brock Executive-in-Residence, served as judges this year. Rick Journey of the Acanthus Group emceed the event.

After the competition, Bender remarked, “I am so thankful to Regions Bank and the Brock School of Business for creating this opportunity. Having been selected to participate in the finals has already opened up many doors for Zion Designs. This has been a tremendous and unique experience, and I can't wait to start employing the many things I have learned in our business venture! Financial help from Regions Bank and residency in the Brock School Incubator should help Zion Designs officially launch. We're so thankful for the many people who believe in the success of our business. “