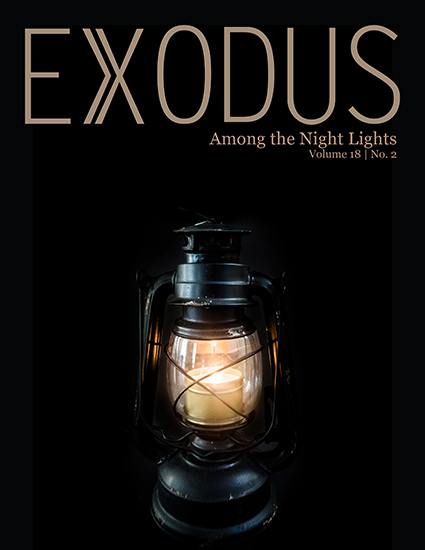 The staff printed 2,000 copies of Vol. 18, No. 2, which are available on Samford’s campus and in businesses in the Birmingham area.

The new, 64-page issue explores evenings in the Magic City. The issue, themed “Among the Night Lights,” is divided into three sections: eats, living and explore. These divisions feature everything from hamburgers to a local candle maker and inspire readers to experience the vibrant city of Birmingham.

Current staff members spent fall 2014 creating Vol. 18 No.1 of Exodus. The theme of that issue was “In the Morning Light,” and the staff wanted to create a spring issue that would complement the fall issue, according to editor Jimmy Lichtenwalter.

“In the fall we chose a morning theme and focused on stories about mornings in Birmingham. This spring we decided to do the opposite and focus on evenings in Birmingham,” said Maddie Davis, Exodus art director. “We wanted the magazine to be cohesive, yet independent. I think when people look at both issues they will be able to tell they were made by the same group of students.”

Exodus is part of a capstone class for journalism and mass communication students concentrating in print journalism, according to Clay Carey, assistant professor and Exodus advisor. Since its inception in 1997, the magazine has received the Southeast Journalism Conference award for Best of the South collegiate magazine five times.

Maggie Rheney is a journalism and mass communication student and served on the Exodus staff.