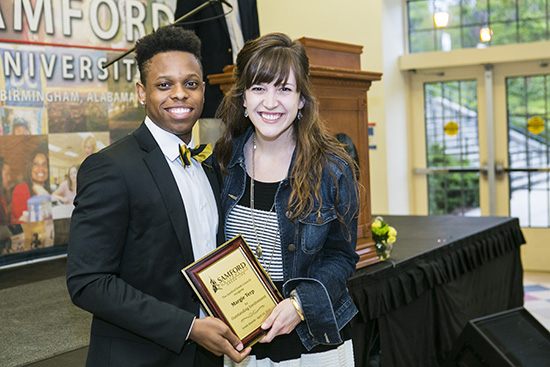 Members of Samford University’s Greek organization community gathered recently to celebrate accomplishments during the 2014-15 academic year and to honor the top chapters and members at the annual Greek Awards Ceremony.

The following awards were presented:

“I am beyond thankful to have been a part of the Samford Greek community and it has been a privilege to be able to serve Greek Life, Panhellenic Council, and this campus in so many ways,” said Hallman, the 2014 Panhellenic president and an award recipient. “The experiences I have had have helped shape me into the woman I am today. It was an honor to be recognized by the Greek community.”

Bailey Fuqua is a journalism and mass communication major and a news and feature writer in the Office of Marketing and Communication
Samford is a leading Christian university offering undergraduate programs grounded in the liberal arts with an array of nationally recognized graduate and professional schools. Founded in 1841, Samford is the 87th-oldest institution of higher learning in the United States. The Wall Street Journal ranks Samford 1st nationally for student engagement and U.S. News & World Report ranks Samford 66th in the nation for best undergraduate teaching and 104th nationally for best value. Samford enrolls 5,683 students from 47 states and 19 countries in its 10 academic schools: arts, arts and sciences, business, divinity, education, health professions, law, nursing, pharmacy and public health. Samford fields 17 athletic teams that compete in the tradition-rich Southern Conference, and ranks 3rd nationally for its Graduation Success Rate among all NCAA Division I schools.
Director of Communication
Holly Gainer
Hgainer1@samford.edu
912-344-8443