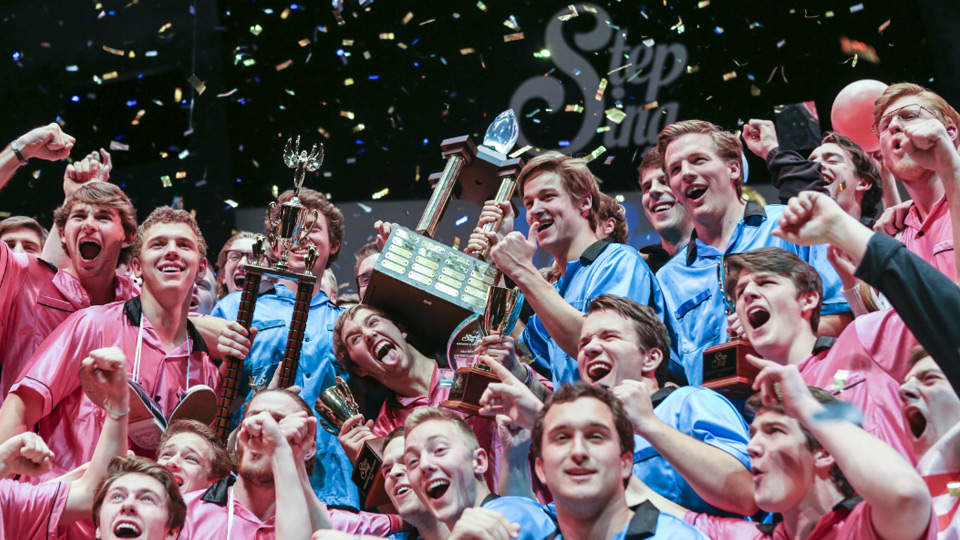 In addition to the coveted Sweepstakes Trophy in the annual student-produced talent show, Sigma Chi received all three judges’ awards for excellence in music, choreography and creative. They also received the participants' choice award, as voted by all Step Sing participants, for favorite choreography.

Their show, “Alley Cats,” was set in a bowling alley and included human pins and bowling balls.

Sigma Chi was second runner-up in 2014 and previously won Sweepstakes in 2008.

Dudes-A-Plenty, a group that comes together each year just to perform in Step Sing, was second runner-up. Directors for their show, “Unleashed,” were Jay Morris, senior finance major from Columbus, Georgia, and Stephen Rice, junior religion major from Oldsmar, Florida.

They also received the participants' choice awards for costume, music and most entertaining.

FreshMix, a freshman coed show, received the other participants' choice award for favorite emcee. Awards selected by the Step Sing committee were presented to Alpha Tau Omega fraternity for favorite moment; Independent Ladies for favorite song; and Phi Mu sorority for directors of the year.

Alpha Omicron Pi sorority continued their multiyear streak as the participating group to raise the most money – nearly $3,000 -- for the Step Sing philanthropy.

As of Saturday evening, all participants had collected $10,863 for Morning Star Foundation, which primarily cares for orphaned, abandoned and needy children with severe heart disease in China. Meredith Toering, a 2013 Samford graduate, works with Morning Star and was on stage to present the award to AOPi. Toering told the audience that she would be returning to China the next morning and had enough money to provide a much-needed surgery for one of the children at Morning Star.

More than 900 students representing 16 different groups performed four shows in the 65th production of Step Sing. The show is totally student-produced and professionally judged. It is considered one of Samford's most cherished traditions.

Lenning said they began planning this year’s show in April 2014.

“It has been an incredible experience,” she said. “It was so fun and so worth the time to see the groups come so far to produce their shows.”

Tolbert echoed Lenning. “It has been an amazing experience to direct Step Sing. Working with Scottie and the show directors and groups and to see their hard work pay off was worth it.”

Step Sing originated on the steps of Renfroe Hall on Samford's East Lake campus before the university relocated to its present location in the late 1950s. This was the 44th anniversary for the Sweepstakes Award.

Former show directors, choreographers and arrangers were invited to a special reception on Friday evening hosted by Samford’s Office of Alumni Programs.

One of those attending the reception was 1994 graduate Craig Hyde, who designed the Sweepstakes Trophy that is still in use.

"It is surreal now to see the trophy,” Hyde said. “In my mind I saw it when it was pristine, and now I get to see it worn and in the hands of all of the winners.”

In addition to the four live performances on campus, more than 10,000 people connected to live streams of the three evening shows. Several alumni groups around the world hosted watch parties for the live streaming, with 107 parties registered in 17 different countries.