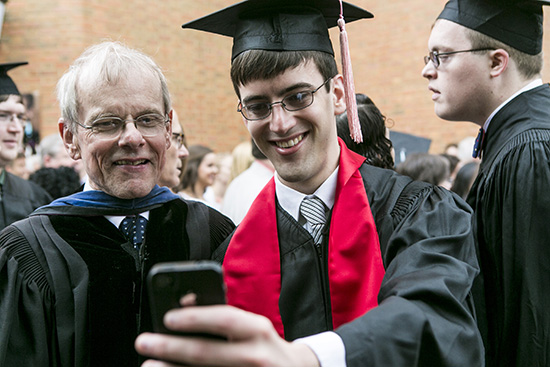 Marching to the majestic strains of "Pomp and Circumstance," hundreds of Samford seniors processed into Wright Center May 14-16 for six commencement ceremonies marking the close of the University’s 173rd year. About 1,000 seniors received degrees during the programs as smiling parents, family members and friends looked on.

Speakers touched on a variety of themes ranging from health care to the definition of a Cumberland lawyer, the influence of Christian educators, the making of family films and the planting of trees.

Brad Creed, Samford provost and executive vice president speaking at the Howard College of Arts and Sciences commencement, took his theme from President Andrew Westmoreland’s quote, "We sit in the shade of trees we did not plant." Creed said, "We are all beneficiaries of the contributions, generosity, and support of someone besides us." If grateful people sit under trees they did not plant, he said, "great people plant shade trees that they’ll never sit under." He told the seniors, "It’s time to do something productive that will bless others, even if you don’t get credit for it or reap the benefits."

Lucinda Maine, executive vice president and chief executive officer of the American Association of Colleges of Pharmacy, told McWhorter School of Pharmacy graduates that the rapidly changing health care landscape means pharmacists today will have even more of an impact on patient care in the future. She told them they must be "smart and bold and passionate and entrepreneurial" in their careers.

Nena Sanders, Samford College of Health Sciences vice provost, said health sciences graduates are uniquely prepared to combine their faith, skills and knowledge to positively impact the lives of individuals and communities. She told the graduates they would go on to more than just a career, "you will create a life rich in opportunity and fulfillment knowing you make a difference in the life of each person you touch."

Micheal Flaherty, president of Walden Media, commended seniors in the School of the Arts and Orlean Bullard Beeson School of Education, in their choices of a career. "You’ve chosen a career that will have more impact than any other," he said. Flaherty’s company is known for the development of family films and literature. Its film credits include The Chronicles of Narnia, Charlotte’s Web and Bridge to Terabithea, among others.

William Stevens, retired chief executive officer of Motion Industries and chair of the Samford board of trustees, told Brock School of Business graduates that attending Samford had blessed him. "Samford was a key part of my preparation for life, not only with my degree, but the exposure to Christian educators and supporters." Stevens told the seniors they would do well to follow the words of Samford’s motto, "For God, For Learning, Forever."

Woodrow Hartzog, associate professor of law at Samford’s Cumberland School of Law, told the law seniors that Cumberland lawyers are relentless, they know life outside the law, they take themselves "just seriously enough," they are loyal and they are in the people business. These traits "make us who we are," said Hartzog, also a Cumberland graduate. "I hope you can see them in yourself as well, and draw upon them as you start your legal career," he told the graduates.

Travis Coleman, senior minister at First Baptist Church of Prattville and president of the Alabama Baptist Convention, urged Beeson Divinity School graduates to go forth and "set an example for a lifetime." Speaking during Beeson commencement in Hodges Chapel May 6, he said,"Set an example in your public life. Be a pattern for your congregation." He told the young ministers that practice leads to improvement and added that he still goes to his church each Saturday to practice his sermon.

Also as part of commencement weekend, Samford seniors, faculty and administrators gathered May 15 for a prayer breakfast that focused on faith, scholarships and friendship. President Westmoreland told the seniors, "Don’t think for one minute that this is the end of anything. It is the beginning of everything. We want you to do well." He urged them to continue their association "with each other and with this place."