Hidden Gems: The Streets of Samford 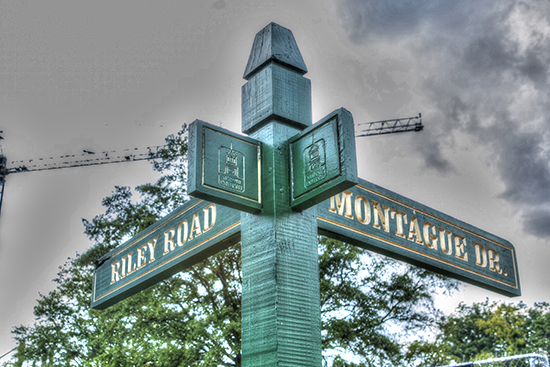 Editor's note:  This is one in a recurring series on "hidden gems" on the Samford University campus.

Scattered across the Samford University campus are street signs directing students and visitors around Samford’s winding roads. Many of the streets are named for the school’s past presidents and the signs serve as constant reminders of their influence on the university.

Neal Road - Named for Thomas V. Neal, president of Howard College from 1932 to 1939. Given the difficult task of managing the school during the economic depression, Neal had to make major cuts to save Howard from financial crisis.

Shelburne Lane - Named for James M. Shelburne, president of Howard College from 1912 to 1918. In 1913, Shelburne allowed ten women to enroll at Howard, officially establishing the college as a coeducation institution. He also introduced a journalism program in 1915, and established departments of music and education, and the first office for student employment.

Dawson Drive - Named for John C. Dawson, president of Howard College from 1921 to 1931. Dawson might be remembered best by students as the president who instituted a policy that prohibited dancing on campus, a practice that remained in place for more than 60 years.

Montague Drive - Named after Andrew P. Montague, president of Howard College from 1902 to 1912. Montague successfully raised funds for a new library and building, established Howard’s first football team in the fall of 1902 and oversaw the birth of the student yearbook, Entre Nous.

Sherman Circle - Named for Samford's first president, Samuel Sterling Sherman. Sherman was 27 years old when he accepted the presidency of Howard College and opened the single wooden building in 1842.

A. Gerow Hodges Drive - Named for Andrew Gerow Hodges (1918-2005), a war hero, businessman and community servant. While not a Samford president, he was an influential donor and community leader who served many years on the board of trustees. Hodges attended Howard College where he was lauded as a successful business student and member of the football team. Hodges later served in the National Guard and was awarded two Bronze Stars for his service with the U.S. Army’s 94th Infantry Division as a field director of the Red Cross. Learn more about Andrew Gerow Hodges.

Riley Road - Named for Benjamin Franklin Riley, president of Howard College from 1888 to 1893. At the time Riley accepted the position, the school had just relocated to the East Lake Community in Birmingham and was in a financial crisis. Riley worked tirelessly to increase both enrollment and endowment, and eventually saw the largest enrollment class in 1893.

Talbird Circle - Named for Rev. Henry Talbird, president of Howard College from 1852 to 1863. During Talbird’s presidency a campus building caught fire and killed a servant who courageously re-entered the residence hall to wake the students. Harry’s Coffeehouse, a popular study and hang-out spot in the University Center is dedicated to the hero. Talbird left Howard during the Civil War to lead the 11th Alabama Infantry Regiment, a company comprised of Howard students and other young men from the area.

Bailey Fuqua ’15 served as a news and feature writer in the Office of Marketing and Communication prior to her graduation from Samford.