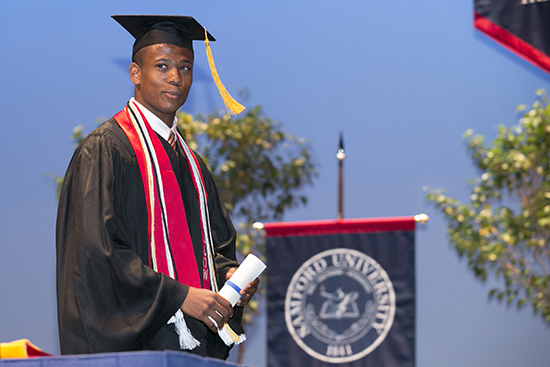 Tassels have been turned and Samford University diplomas have been given places of prominence on home mantels and walls.  Now what?

For many new degree holders from Samford’s graduate and professional schools, enhanced prospects in their current careers may be their immediate reward. For most law graduates, intense bar exam preparation looms large. Others in such diverse fields as nursing, pharmacy and accounting will be studying for state licensing exams, areas where Samford graduates typically excel at high levels.

New Samford alumni who received bachelor’s degrees in a myriad of undergraduate academic areas are embarking on journeys that will take some to performance stages, hospital operating rooms, business firms, classrooms, mission fields, and in at least one case, a professional sporting arena. Others will continue their education at graduate school programs throughout the U.S. and abroad.

“We are constantly impressed by and proud of the paths our students embark on after graduation,” said Nancy C. Biggio, Samford’s associate provost for academic administration. “Seeing students apply what they have learned in the classroom, lab, clinical setting, internships and throughout their time at Samford validates the hard work of Samford faculty and staff.”

The forecast looks bright, indeed. Here, a look at what lies ahead in the near future and beyond for a sampling of recent graduates:

Rebekah Brooks will pursue a Ph.D. in cell and molecular biology with a concentration in cancer biology at the University of Pennsylvania.  The Samford chemistry major also hopes to earn an M.B.A. and start a biotechnology company.  “I’d like to be involved in health policy legislation,” says Brooks, a Goldwater Scholar who engaged in summer research at well-known national research universities throughout her undergraduate career. Until she begins classes in August, Brooks is writing a book, A Daydreamer’s Guide to Organic Chemistry, a non-textbook that focuses on the personification of organic chemistry.

Clarissa Donaldson, an economics and social entrepreneurship major who minored in mathematics, will teach ninth grade algebra with Teach for America in Nashville, Tennessee. The Brock Scholar hopes to implement lasting change in students’ lives though education. “Education is one of the most powerful vehicles for achieving sustainable economic development,” said Donaldson, who believes that the Teach for America experience will help her understand issues faced by low-performing schools and equip her to pursue a career in educational policy and reform.  She hopes to pursue a Ph.D. in economics or public policy.

Clay Hubbard will engage in college ministry with Campus Outreach at the University of Queensland in Brisbane, Australia. The business management major said that at Samford he was fortunate to have people invest in his spiritual life. “Because of how much I grew in my faith at Samford, I wanted to play a small part in helping other college students know the Lord,” said Hubbard, who cites an extremely high percentage of non-Christians among Australian college students.

Sharon Mays will study for a master of music in choral studies degree at Cambridge University in England.  She will receive lessons from conductors of prominent chapel choirs, with accompanying coursework on musical notation, choral literature and theological and liturgical contexts. “My career goal is to lead an ecclesiastical music program with a primary focus on conducting the choirs,” said the Samford church music major who looks forward to being part of the rich Anglican choral tradition at England’s 800-year-old institution.

David Osula is headed to University of Alabama at Birmingham medical school on what Samford pre-medical adviser David Garza describes as the most generous scholarship the UAB program has to offer.  Osula cites Samford as a school that prepares students to be successful. “Samford has certainly done its job in that respect,” said Osula, a biochemistry major whose passion for the sciences and a desire to serve others “in a tangible way” informed his pursuit of a medical career. Besides building an impressive academic record, Osula was Samford’s campus student liaison with Habitat for Humanity housing ministry.

Graduates of Samford’s teacher education and human development and family life education programs will use their degrees in many ways and places.

Melanie Neff, for instance, will remain in Birmingham to work at the Exceptional Foundation. Another human development and family life education major, Hannah Newman, will move to Mumbai, India, to work as a field office intern for the International Justice Mission.

Student athletes from a cross-section of academic majors will be found close to their alma mater--at least for a few years--as well as across the country.

Basketball standout Tyler Hood is a part of the inaugural class of Samford’s three-year Doctor of Physical Therapy program that rolled out this month in Samford’s College of Health Sciences.  His interest, Hood has said, stems in part from the help he received from a physical therapist after he suffered knee injuries in high school.  “I really benefited from his actions and I want to pay it forward in my future as well,” said Hood, an exercise science and sports medicine major who was known as the team’s unofficial spiritual leader.

Bulldog safety and geography major Jaquiski Tartt may be more likely to physically miss his alma mater. When he was selected by the San Francisco 49ers in the second round of the 2015 National Football League Draft--the 46th overall pick--on May 1, Tartt became the highest drafted football player in Samford history. The three-time All American at Samford became the first player in Samford history to play in the prestigious Senior Bowl, played in January in his hometown of Mobile, Alabama.