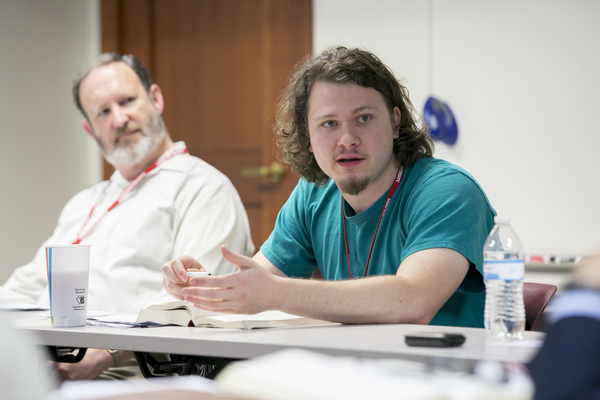 The University Fellows honors program at Samford University hosted its first Teaching the Christian Intellectual Tradition (TCIT) Summer Seminar May 31-June 5. The seminar, focused on Dante’s Divine Comedy, brought together 15 scholars from 11 universities and colleges (see list below) for a week of immersion in one of the West’s most important and enduring texts.

In fall 2014, University Fellows and Samford’s Core Texts program hosted a large TCIT conference focused on “Teaching Augustine” and funded by the Lilly Fellows Program in Humanities and the Arts. This year’s event, organized by University Fellows with support from the office of Samford’s provost, continues the effort to connect faculty at allied schools. Chris Metress, Samford's associate provost for academics, said that although the participating institutions and faculty members have their own identities, “there’s a larger shared identity of loving the liberal arts, loving the Christian intellectual tradition and, most importantly, making students feel they’re a part of that tradition.”

For many scholars, teaching Dante’s allegorical Divine Comedy is an obvious way to support that common identity and purpose. Dante was an innovative poet and political figure in 13th- and 14th-century Italy. Divine Comedy, in which he describes a journey through hell, purgatory and heaven, is considered one of the world’s greatest literary accomplishments. Echoing the poet T.S. Eliot, University Fellows director and seminar organizer Bryan Johnson said the Divine Comedy transcends its specific historical and cultural context, bridging the classical and Christian worlds to provide a history of the West.

Seminar participant Walker Cosgrove, a history professor at Dordt College, was moved by Dante’s masterpiece when he first encountered it in graduate school. He has long wanted to introduce the work to his own students but wasn’t sure how to do that until attending the Samford seminar. Cosgrove said he now plans to adjust the syllabus of his fall medieval history course to include Divine Comedy. He will focus on the work as an allegory of the soul, but he also believes it can help students understand the medieval perspective. “I want them to participate in the middle ages, in a sense, so I want them to be thinking about pilgrimage and visions,” Cosgrove said.

Theology professor Maria Johnson of the University of Scranton, attended the TCIT conference last fall and was pleased to return for the exploration of Divine Comedy. She said that although Dante already is the centerpiece for her theology course on “Heaven and Hell,” she wanted to know more about Divine Comedy. She uses the work as a way of exploring human moral life, and feels that it serves as a foundation for student understanding of the other texts and concepts she introduces in the course.

As important as the students are, the intellectual enrichment of faculty is a significant goal of the TCIT series. “You may never teach Dante, but I think you’ll be a better professor, whatever the discipline, for having spent a week doing this,” Bryan Johnson said. Maria Johnson was impressed that Samford values that kind of personally enriching experience and that it offered the TCIT seminar at minimal cost to participants. “You’re doing this for us,” she said. “This is just pure grace.”

Metress and Johnson, who led the seminar with Samford Classics professor Shannon Flynt, said the university does hope to gain something by the work. It seeks to serve those engaged with teaching the Christian intellectual tradition, but it also hopes to be enriched by what others already know and will learn as they participate in the TCIT events and create similar programs at their own institutions. “I hope they’ll go back to their universities and try this with their faculty,” Johnson said. Then, someday, the group will reconvene with new members at another school and explore another great text.

“We’re all teaching at institutions that have the same commitment to teaching the Christian intellectual tradition,” Metress said. “We’re all pilgrims in that way, on the same journey.”

The journey will continue at Samford June 15-19 as University Fellows hosts a smaller version of the Dante seminar for its annual “Great Ideas Summer Institute” (GISI) program for Samford faculty.