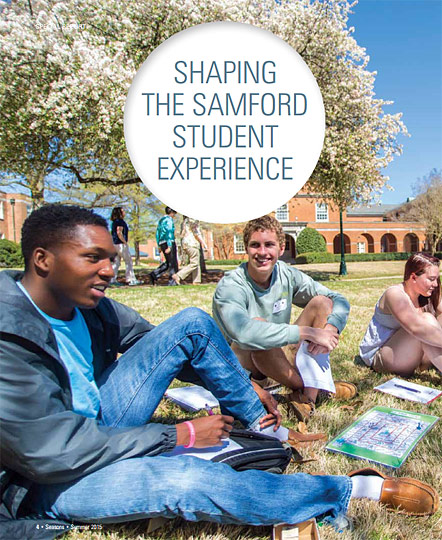 After completing an internship at a community center in London during a semester abroad, she realized she wanted to pursue a career in education. She taught a pre-kindergarten class at a high needs area school in Washington, D.C., last year. This fall, she’s headed to graduate school at Columbia University’s Teachers College in New York City.

“My experiences at Samford—from the on-campus activities, to studying abroad, to serving in the Birmingham community, all shaped who I am today,” she said. She cited professors who taught her to examine, question and find solutions to problems.

“I’m thankful for the practical communication and administration skills I learned from serving on Student Recruitment Team and the SGA Executive Board.” She chose to be on SGA “because I wanted to be involved in the process behind how things worked on campus.”

Hutcheson said her love for Samford and how much it helped her to grow led her to join Samford Ambassadors and the Student Recruitment Team. “I wanted to tell others how Samford has positively influenced me and shaped me during my time there.”

“Our vision is to provide a holistic experience that promotes lasting friendships and memorable campus experiences that are both fun and rewarding,” she said.

Out of Classroom Experiences

Moss noted that a recent Gallup Poll identified six elements of an undergraduate experience that had a significant effect on post-graduate success. “All six are aspects authentically represented in the Samford student experience and several bridge academic and outside-of-classroom experiences,” she said.

The element “most directly related to our mission is being engaged in extracurricular activities and groups.” She noted that “all of our efforts are focused on (producing) a positive and valuable student experience.”

As Samford’s campus life staff professionals seek to produce the holistic student experience described by Moss, several events and programs provide help to meet that goal.  They include:

The SGA first-year leadership experience guided by the Office of Student leadership.  Led by Laura Breedlove, it establishes a small focused group to dialogue at the start of the Samford experience about life calling and leadership development.

A group of upperclass students who commit their first week to welcoming new students to campus.  Paige Acker, coordinator of students activities and events, leads the program that matches first-year students and Connections leaders in small groups to learn about becoming active in the Samford student family.

More than 40 percent of students participate in some form of sport activity at Samford. It provides experience in building team work, develops healthy conflict resolution skills and teaches how to win (and lose) with grace.

Executive officers from each of the 14 member organizations of the three Greek governing councils—Panhellenic, Interfraternity and National Panhellenic Councils—convene to discuss best practices and ways to build community through collaboration.  Among undergraduates, 43 per cent were involved in Greek life during 2014-15.

Ted Alling, a 2000 graduate and highly successful Chattanooga, Tennessee, businessman, believes his out-of classroom experience was as valuable as his class time.  Alling met his two best friends, Allan Davis and Barry Large, as pledge brothers at the Sigma Nu house.  They became leaders of their fraternity.  He also met his future wife, Kelly Schmidt, while the two of them were serving as RA’s at the Sigma Nu and Chi Omega houses.

“We (Alling, Davis and Large) were very active as officers at Sigma Nu and cared deeply about our fraternity,” said Alling.  “We have learned in the years since that running a  fraternity is very similar to running a business. You have to recruit members, hold meetings, be responsible for others and have passion.”

After graduation, Alling and Large founded Access America Transport, a transportation and logistics company that worked with customers to move freight by truck and rail.  Davis later joined the company.

“The leadership skills we learned at the Sigma Nu house are lessons we still teach every day,” said Alling.

Access America became one of the fastest growing companies in its field, ranking as Forbes America’s #9 Most Promising Company in 2013.  In 2014, the owners sold their company to a Chicago firm in a deal valued at hundreds of millions of dollars, according to the Chattanooga Times/Free Press.

Community service is an area that draws heavy involvement from Samford students. Programs such as Freshman Forum help guide them to service opportunities in which they have interest.

David Osula, who graduated in May, found out about volunteering with Habitat for Humanity through freshman forum. That was three years ago. Since then, he has done his share of hammering, painting and drilling at Habitat work sites in the Birmingham area.  He has also recruited volunteers and served as manager on Samford Habitat projects.

Osula will head to medical school in the fall.  But that won’t change his commitment to Habitat. As he puts it, “service has become a part of who I am.”

“The primary value (of service activities) is being able to show the love of Christ,” he said. “One of the best ways to display this love is by serving others and spending time out in the community.”

Osula was also heavily involved in other areas of campus life, including Omicron Delta Kappa and Howard Scholars—both service organizations—and Greek life as a member of Pi Kappa Phi.

Samford students spent 583,198 hours serving their community during 2013-2014, according to a report compiled by Pennington and her office.

“Behind these numbers are hundreds of personal stories,” noted Samford President Andrew Westmoreland. “Each illustrates Samford’s enduring commitment to vital experiences in learning that go far beyond the classroom. Through serving and reflecting on the meaning and value of that experience, knowledge can become wisdom.”

Typical of student involvement in community projects is the annual Samford Gives Back day each spring. This year, almost 600 students spent a busy Saturday morning in April cleaning buildings, sorting clothes, laying straw, painting and performing a multitude of other chores at agencies and organizations in Birmingham.  They tackled whatever was needed at 31 work sites.

“Volunteering with Samford Gives Back opens your eyes to what is going on in the community and allows you to develop a global perspective to better understand what is going on right around the corner,” said Katie Nelson, a junior nursing student.