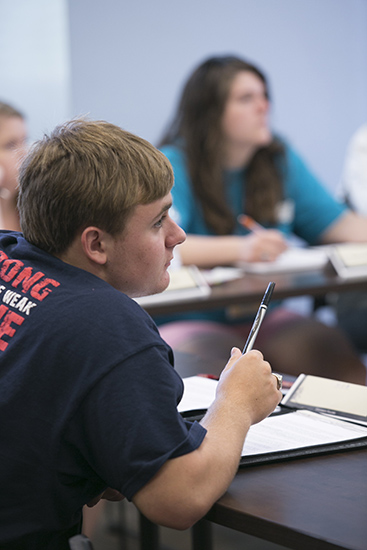 The Samford University Fellows program has hosted two summer programs to give rising high school juniors and seniors a preview of the college experience at Samford while simultaneously challenging them intellectually.

Bryan Johnson, University Fellows director, said the two programs have similar daily schedules, with two classroom sessions each morning and one in the late afternoon. Samford faulty facilitate these discussion-oriented sessions, encouraging students to explain and defend their own ideas.

“A week is a lot of time to be spending most of each day with a couple of college professors,” Johnson said. “That’s something people don’t address often – that students have to adjust to college professors and learn what they are like, so I think this is helpful for them to do that.”

GISI is a textual discussion course following the theme of “Greece, Rome, and the Roots of the American Republic.” This is the fifth year the Fellows have hosted this program.

“Students read great texts from ancient Greece and Rome and talk about how those ideas helped develop the American Republic,” Johnson said.

QFSI is in its second year of existence and focuses on the quantitative and analytical methods used in modern finance.  This includes statistics, stock analysis, trading strategies and much more.

Nine University Fellows students also help run the programs, doing everything from teaching portions of the classes to assisting in the residence halls.

University Fellow and junior Jordan Holland assisted with QFSI last week, and he believes the program educates attendees about finance in a way that most other high school students will never experience.

“Most people don’t really know what exactly finance is because it’s a very complex subject,” Holland said. “I think QFSI is a wonderful opportunity for high school students because it gives them a great overview of what financial markets are and how people evaluate them.”

In-the-classroom education, however, is only a portion of the experience the University Fellows hopes to give attendees, Johnson said. From Sunday to Friday, students stay in campus housing, eat in the cafeteria and go on off-campus trips.

“It’s really neat to think about how the ideas we talk about in the classroom are all around us in the city,” Prickett said. “Engaging those places with high school students is really fascinating. They learn that these ideas are not just in the texts that we’re talking about. We see them in art, we see them in the Civil Rights Institute.”