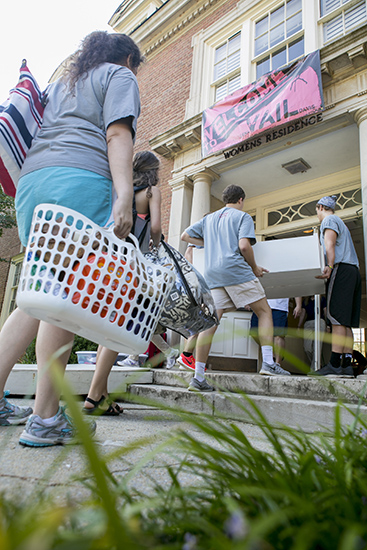 More than 800 freshman students rolled onto the Samford University campus Friday, Aug. 14, filled with excitement about beginning a new chapter in their lives.

They are already making history as part of the largest-ever freshman class at Samford.  With transfers, the university will have more than 1,000 new students this fall, and total enrollment is expected to exceed 5,000 for the first time in Samford history.

Move-in Day, a traditional part of the first-year experience for students and their parents, went especially smoothly.  Thanks, perhaps, in part to tolerable August temperatures and humidity levels, but also to the helpfulness of Samford staff and volunteers.

Dozens of helpers assisted with unloading vehicles and more than a few pull-behind trailers, and then helped move the students’ many essentials of life into dorm rooms.

“It’s awesome to have help,” said Beth McCraney of Newtown, Pennsylvania, whose son, Connor, is her second child to enroll in college. When her older son moved into a school nearer their home, she said, “You moved yourself in.”

Connor, a pre-ministerial scholar who plans to become a pastor, will major in religion and minor in business. He chose Samford after attending a Preview Day as a high school senior. “I like that Samford has so many things, football, Greek life, academics and a strong spiritual life,” he said.

The freshman was grateful for the moral and hands-on support of his grandparents, Rock and Betty Jean Spann, who drove from their home in Atlanta, Georgia, to be a part of his special day.

Kasey Lee of Orlando, Florida, settled into her room in Lena Vail Davis residence hall with the help of her mom and dad, Ann and David Lee.  The nursing major said she is excited about “pretty much everything” about her freshman year.  “I am looking forward to meeting people, and making new friends,” said Kasey, who plans to participate in sorority rush.

She will be well shod. While Kasey and her mother stowed clothing and other items, dad’s task was to assemble an expandable metal shoe rack.  An impressive pile of shoes for all occasions lay in wait nearby.

Caroline Thomas and her parents, Scott and Barbara Thomas, arrived from their home in Greensboro, North Carolina, with a trailer in tow—one of many spotted near the residence halls.

A nursing major, Caroline is the last of her parents’ children to leave home.  “We’ve done this before,” Scott Thomas said of moving a child to college.  And how will they adapt to being empty nesters?  “We will find out,” he said.

Caroline was excited to reunite with her new roommate, Lizzie Young of Memphis, Tennessee. who arrived with her parents, Keith and Christy Young. The new roomies had met on a Samford App, and had attended the same orientation session in June.

Freshman Christian Szostak and his parents, Ileen and Micahel Szostak, unpacked after a trip from their home in the Tampa Bay, Florida, area.

Christian, who had never visited Alabama before he took a Samford campus tour in 2014, said he learned about the school from his church pastor and several teachers who are grateful Samford alumni.

On move-in morning, he was yet to meet his Smith residence hall roommate, who had arrived earlier and deposited a jumble of clothes, tapes and other items.  “From what I see, we’ll get along fine,” Christian predicted.

Adjusting as empty nesters may be especially interesting for freshman Micaiah Helms’ parents, Heather and Ken Helms of Fayetteville, Georgia.

Micaiah is the final of the couple’s eight children to enroll at Samford. “We let them all look at other schools, but they always came back to choose Samford,” said Heather Helms, who has homeschooled all eight.

She and her husband, in his 28th year as associate pastor of Harps Crossing Baptist
Church in Fayetteville, are Samford alumni who met as students and were married in Reid Chapel.

Micaiah plans to major in exercise science. “I like what I know about Samford’s academic excellence and the friendliness of the campus,” Micaiah said, adding that the school’s new graduate physical therapy program meshes nicely with his long-range academic plans.

Before sharing hugs and final goodbyes, students and their family members attended a Family Welcome program in Wright Center.

Samford President Andrew Westmoreland urged the new students to use their college experience to write the best record for themselves that they can.

“Beginning now, you are going to be writing your own record that in years to come will define who you will become.  You know how to live a virtuous life, so live it. You know how to honor others, so do that,” he said.

“Let’s move into a time together so that the record you write will be one that you treasure.”