Published on September 23, 2015 by Kristen Padilla   Share this on: 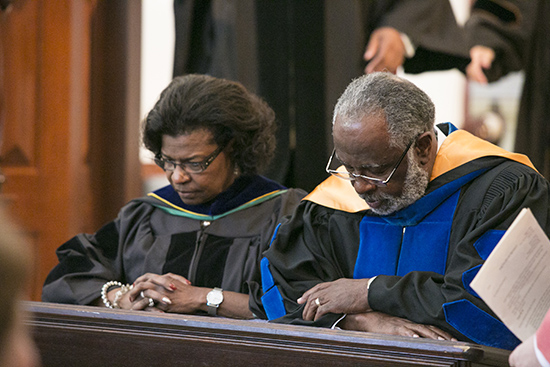 The Carter Chair is the first endowed Baptist chair at Beeson Divinity and is named for long-time Samford trustee and Baptist pastor Charles T. Carter. Smith, who has taught Christian preaching at Beeson since 1997, was appointed as the recipient of this chair earlier this year by Samford’s board of trustees.

“The installation of Robert Smith Jr. as the inaugural incumbent in the Charles T. Carter Baptist Chair of Divinity recognizes two beloved members of our Beeson faculty,” said Timothy George, Beeson Divinity dean. “Robert Smith and Charles Carter are two of the premiere preachers of our age. They embody the best of the Baptist tradition: faithful proclaimers of God’s Word, pastors par excellence, and shapers of God-called ministers of the gospel. My prayer is that this chair will serve the work of Christ at Beeson Divinity School for generations to come.”

Long-time friend of Beeson James Earl Massey, dean emeritus and distinguished professor-at-large of Anderson University School of Theology in Anderson, Indiana, and Beeson Advisory Board member, presided over the installation and led the Beeson community in a prayer of dedication and laying on of hands of Smith and his wife Wanda.

“To God be the glory for the things he has done,” said Smith as he addressed the community after the installation. “I really do feel like the janitor of Michelangelo, who painted the Sistine Chapel.”

“To sit in a chair, figuratively speaking, [which bears your name], lets me know that I stand on your shoulders,” Smith said to Carter. “I’ve been doing it ever since I’ve been here. You’ve been my pastor; you’ve been my friend. You’ve been my brother. It’s an honor to be able to be installed as the first recipient of the Charles T. Carter Baptist Chair of Divinity.”

Smith, who was joined by friends and family members, paid special tribute to his 91-year-old mother, Ozella, who was recognized by a standing ovation.

Carter, who also was joined by friends and family, gave remarks about this historic event in the life of Beeson.

“Over two years ago the Dean called me to his office,” said Carter. “He wanted to talk to me about the embryonic idea of naming this chair for me. I felt completely surprised, overwhelmed, and humbled. I, of all people, do not warrant or deserve this.”

Turning to Smith, he said, “Of all the preachers I know in America today there is absolutely no one I’d rather see be the first occupant of this chair.”

Friend of Smith and Carter and Beeson Advisory Board member Ralph D. West, senior pastor of The Church Without Walls in Houston, Texas, preached on Romans 1:14-17, “Long-Term Debt with High Interest.” West’s church is one of the largest Baptist churches in the United States.

Samford President Andrew Westmoreland, who offered greetings and remarks about the installation, said that this day “has been long in the making.”

“Today, friends, we come to install in a new place of service a dear friend, a tower of strength, a Christ follower with a complex mind and pure heart, a gifted teacher, a expositor of scripture a human being born, shaped, and inspired and called to preach,” Westmoreland said. “And what a gift to the world he is.”