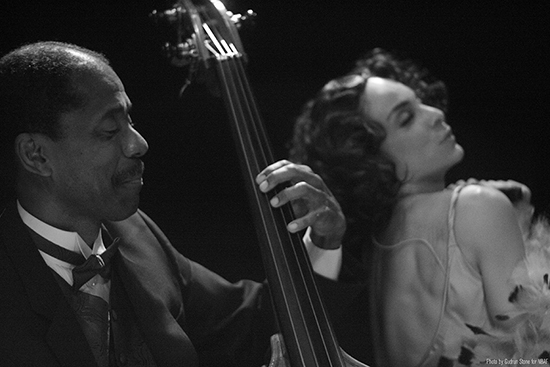 The 7 p.m. performance is part of Samford’s Wright Center Signature Series and also is a featured event for Samford’s annual Family Weekend.

Tickets are $35 per person. Student tickets are $15. Samford employees and students are free. Tickets are available online or at the Samford ticket office, located in Swearingen Hall. Tickets also will be available the night of the performance.

Guy and the Avery Sharpe Trio celebrate the legendary voices of the Harlem Renaissance through text, song, music, movement and imagery. Guy transports the audience to New York’s 1920s Harlem and “explores the rise of artists such as Langston Hughes and Fats Waller,” according to Kenny Gannon, Samford’s director of performance venues and Signature Series coordinator.

In the 1920s and 1930s, Gannon noted, author Alain Locke wrote that the American black community experienced a “spiritual coming of age.”  The words and thoughts of Jean Toomer, Langston Hughes, Countee Cullen, Zora Neale Hurston, W.E.B. DuBois and many others became the defining voices of a new generation of African-Americans. Looking forward but still struggling with the legacy of slavery and racism, these artists found their creative freedom in the Harlem Renaissance. “Raisin' Cane” weaves the work of these artists into a panoramic experience that captures the heart and soul of the lives of thousands of African Americans who left the South and migrated North to Manhattan after World War I.