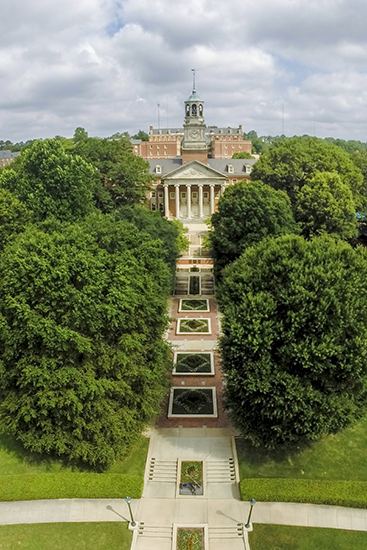 Samford University’s board of trustees approved a building naming, new academic programs and new faculty, among other actions, during their regular fall meeting Sept. 4 in Birmingham.

Trustees approved the naming of the new Brock School of Business building for Samford alumnus and Birmingham business executive Gary Cooney. The building, which was officially dedicated in a ceremony following the trustees meeting, will be known as Cooney Hall. Cooney earlier had provided the lead gift for the building’s construction.

Cooney has been “a stalwart supporter of the Brock School of Business,” trustees were told by W. Randy Pittman, Samford’s vice president for advancement.

“For many years, [Cooney] has been a powerful advocate for a new facility, citing the need for physical facilities that match the quality of our faculty and students.”

Trustees approved a new sports media minor in the Department of Journalism and Mass Communication. The minor would prepare students for careers in the sports industry, and the curriculum covers all aspects of sports media.

Also approved was a name change for the Resource Center for Pastoral Excellence. The new name, Center for Congregational Resources, better reflects an expanded program of services and initiatives to help congregations, Pittman said. The center is largely funded through a grant from the Lilly Endowment, Inc.

Timothy Best, assistant professor of history. He earned his doctorate at Florida State University and has been a visiting professor at Gordon State College in Barnesville, Georgia.

Kimberly Davey, assistant professor of public health. Davey received undergraduate and graduate degrees from Samford and her doctorate at the University of Alabama at Birmingham (UAB), where she had been an instructor since 2009.

Lori Harrison, instructor of nursing. Harrison received her undergraduate degree from Samford and an M.S.N. from Auburn University. She had been serving as a registered nurse at the UAB Medical Center since 2010.

Kristen Johnson, assistant professor of nursing. Johnson has served since 2011 as an adjunct instructor at Samford, where she earned her undergraduate and graduate degrees.

Harold Neumeier, associate professor of health administration. Neumeier already was serving as an adjunct instructor at Samford. He received his doctorate from UAB.

Alan Jung was officially confirmed as dean of Samford’s new School of Health Professions. His appointment had been announced earlier, pending final approval by trustees.

Trustees received the annual report from representatives from PriceWaterhouseCoopers, the university’s auditing firm. PWC partner Drew Waggoner told trustees that the firm would be issuing a “clean opinion” on Samford’s financial statements for the fiscal year that ended June 30.

University administrators provided a series of reports for trustees, including several references to record fall semester enrollment of 5,206 that had been publicly reported earlier.

The university’s endowment as of July 31 was $273 million, according to Lisa Imbragulio, Samford’s investment officer.

Samford President Andrew Westmoreland said this is “by far the most intense period of institutional planning that I’ve ever been involved in in my career.” Westmoreland noted a series of initiatives that will build on each other, starting with a review already underway of potential academic growth and expansion.

“You can sense the extent of work we have to do over the next few months,” he added.