Published on October 19, 2015 by Sean Flynt and Aly Hathcock   Share this on: 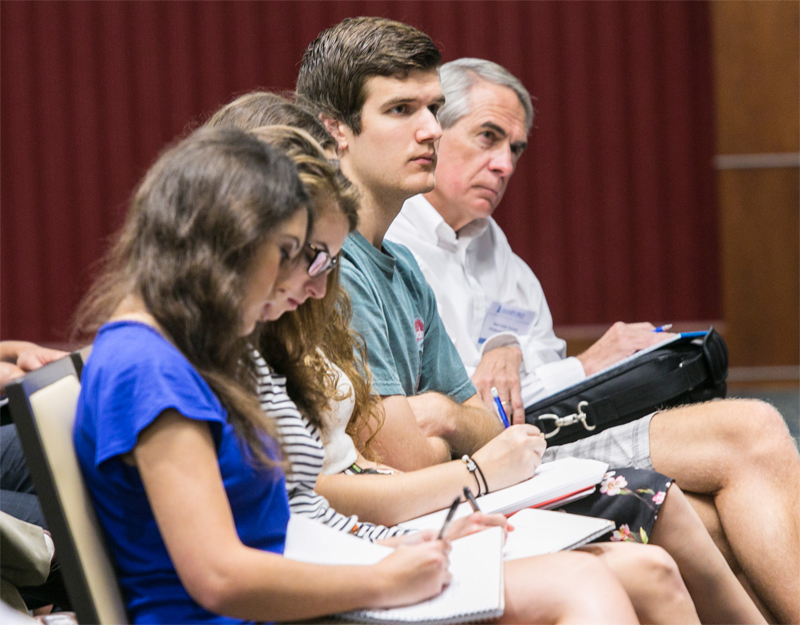 A unique conference in September, funded by The John Templeton Foundation and The Issachar Fund, anchored a season of thought-provoking events hosted by Samford University’s Center for Science and Religion.

“Transhumanism and the Church: Theological Reflections on Technology and Human Enhancement” assembled a diverse group of scholars to consider the ways the church might respond to technologies that could revolutionize our bodies and minds.

Joel Garreau, author of Radical Evolution: The Promise and Peril of Enhancing Our Minds, Our Bodies—and What It Means to be Human, opened the conference with a survey of the state of the art of joining mind and machine.

“We are at a turning point in history,” Garreau said. “For the first time, technology is aimed inward – at the mind, memory and metabolism.”

Many of the technologies Garreau described–including memory pills, affordable DNA sequencing and robotic implants–are already widely accepted or anticipated. Other areas of scientific exploration, including the possibility of creating unimaginably intelligent networks of human brains, are more intimidating, and raise challenging questions about how to use human enhancement responsibly and compassionately.

How humans answer those questions might lead to one of three options, which Garreau described under the headings of “heaven, hell and prevail.” The transhumanist vision of conquering disease, ignorance and even death sits at the top of that list. The hellish vision of a future in which technology is used for violence and oppression, or simply wipes out humans courtesy of a laboratory error, is familiar from science fiction. Prevailing over the worst technology might create and making realistic use of the best might lead to what Garreau called a “new renaissance” in which human response to technology accelerates to match the pace of technological innovation and leads us to new ways to connect with each other.

Cognitive scientist Steve Donaldson, author of Dimensions of Faith: Understanding Faith Through the Lens of Science and Religion and one of the founders of Samford’s Center for Science and Religion, offered one of the most challenging keynote sessions as he sought to frame the technical problems of creating artificial intelligence (AI).

Donaldson described a centuries-long human fascination with the prospect of AI, from the earliest automatons and first modern computers to the current supercomputers that make AI seem inevitable. Leaving aside science fiction and the most utopian transhumanist projections, Donaldson raised serious doubts about how quickly AI might be achieved, if at all.

“As a scientist, I never say never,” Donaldson said, but he and other scholars find significant obstacles in computational complexity, which he said is “where the rubber meets the road” in AI and transhumanism.

Donaldson said the currently inescapable problem of AI is that the complexity of problems is increasing along with the increase in computational ability. “Just having a fast computer is not going to solve the problems,” he said. Our descendants will not necessarily have more success solving huge problems, Donaldson said, because as the “search space” of knowledge increases it becomes more difficult to arrive at an answer that has exhausted that space. “You need immortality to solve the problem,” he joked.

Donaldson noted that even a supercomputer that can contemplate 200 million chess moves per second would need not just years, but 10-to-the-90th-power years to consider all the options for a single move. “The number of possibilities gets out of hand extraordinarily fast” so the computer must examine only part of that “tree” of options and make a best guess, Donaldson said.

Clearly, best guesses are going to be around for a long time and the autonomous killer robots are not quite at the door. But, the conference also made clear that we are already changing ourselves, and the church has a role to play in considering the ethical quality of those changes and relating them to traditional beliefs. We don’t yet know if humans will be able to overcome all the technical obstacles to AI and the grandest visions of transhumanism, but Donaldson was willing to make at least one confident prediction. “We can’t outrun faith no matter what happens with the transhumanist agenda.”

Samford’s Center for Science and Religion hosted a second series of events with noted scholar Denis Alexander Oct. 19, and will offer a ministers’ workshop and public lecture by University of Edinburgh physicist Mark Harris Nov. 18. The evening lectures are free of charge and open to the public. Clergy interested in the ministers’ workshops should contact jareeves@samford.edu.
Samford is a leading Christian university offering undergraduate programs grounded in the liberal arts with an array of nationally recognized graduate and professional schools. Founded in 1841, Samford is the 87th-oldest institution of higher learning in the United States. The Wall Street Journal ranks Samford 1st nationally for student engagement and U.S. News & World Report ranks Samford 37th in the nation for best undergraduate teaching and 97th nationally for best value. Samford enrolls 5,758 students from 48 states and 22 countries in its 10 academic schools: arts, arts and sciences, business, divinity, education, health professions, law, nursing, pharmacy and public health. Samford fields 17 athletic teams that compete in the tradition-rich Southern Conference, and ranks 3rd nationally for its Graduation Success Rate among all NCAA Division I schools.
Director of Communication
Holly Gainer
Hgainer1@samford.edu
912-344-8443