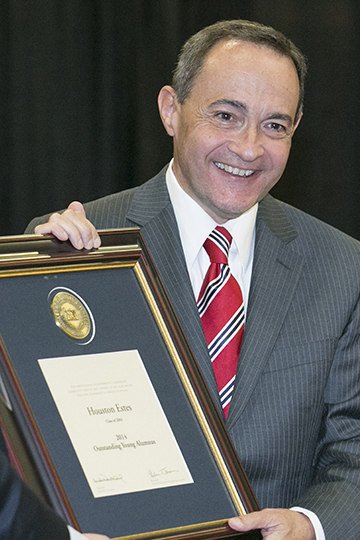 Tickets are $30 per person. Advance reservations are required, and tickets can be purchased online.

Reunion classes and volunteers will be recognized during the banquet, according to Molly McGuire England, Samford’s director of alumni programs. Featured reunion classes are 1965, 1990 and 2005.

Carlisle, a chief executive officer at the Birmingham law firm Sirote & Permutt, graduated from Samford in 1988, and from the Cumberland School of Law in 1991. His wife, Karen, also graduated in 1988. Both are very active in Birmingham’s Briarwood Presbyterian Church and longtime supporters of Samford athletics and campus events. They have 3 children, including two daughters attending Samford.

Cox is a 1972 graduate and has remained active by serving on Samford Athletic Foundation board. He is a dentist in Phil Campbell, Alabama.

The alumni of the year awards date to 1956. The Outstanding Young Alumnus award was added in 2009.

The homecoming banquet recreates a Samford tradition that dates to the 1860s when alumni first gathered for what became known as the Candlelight Dinner to welcome former college president Samuel Sterling Sherman home following the end of the Civil War. The banquet later moved to commencement weekend when alumni would return to campus to honor the graduating class.

It was discontinued in the 1990s but revived in 2003 on homecoming weekend and has grown in popularity since, England noted.

Seibert Hall will be the location of the students’ Homecoming Ball the previous evening, which will allow alumni and friends attending the banquet to enjoy the same atmosphere as the students, England added. Birmingham event company Kathy G’s is decorating Seibert Hall, and Tre Luna Catering is providing food service for the banquet.