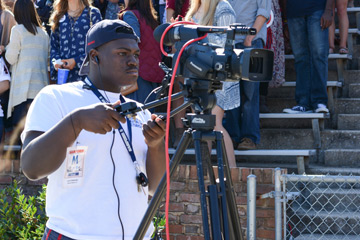 Samford is only the second school in the nation to develop in-house production for an ESPN3 broadcast. “We produce it all on our own with students, faculty and some freelancers and then send it to ESPN3 where they broadcast it,” said camera operator Eric Biancalana, a junior JMC major from Sanford, Florida.

Creating a live production that will be broadcast to more than 75 million homes is no easy task, and it takes a lot of work to make it happen. Eleven students, most of them journalism and mass communication majors, help make the productions happen.

ESPN3 sideline reporter Caroline Saunders, a senior JMC major from Lakeland, Florida, starts preparing for the game multiple days in advance. “I spend at least four hours each week looking over game notes and interviewing different players in order to figure out what I want to talk about that week,” Saunders said.

Most football games start at 2 p.m., and by noon, the ESPN3 production team and talent begin preparing for production.

Before the game starts, camera operators receive cards that include play-by-plays of the game, what type of shot to get for each play and a list of coaches and players to be on the lookout for during the game.

Generally, each member of the production team has a set position for the season, but this may vary, giving students experience working in multiple positions. Sophomore JMC major Johnny Richards of Norcross, Georgia, is the end-zone camera operator. His primary job is to get close-up shots of players and also crowd shots. However, he has also served as a runner and an assistant to the director, taking care of any problems that arise during production, such as fixing a broken cable.

Some ESPN3 production students also work with other Samford Sports productions. Biancalana started shooting for soccer and then worked his way into shooting football for ESPN3. He now provides commentary for soccer in addition to his work with the ESPN3 football production.

Samford’s ESPN3 broadcast provides students with hands-on experience they would not have otherwise. “It’s a really great opportunity to be working with the nationwide leader in sports,” said Levi Edwards, a freshman JMC major from Davidson, North Carolina. “It’s an opportunity you just have to jump on.”