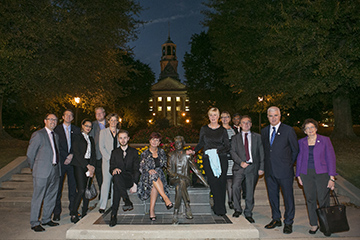 The British flag waved from a Samford University flagpole alongside Old Glory for several days in October. Its presence helped welcome guests from Liverpool, England, who were visiting for the signing of a Sister Cities agreement between Birmingham and Liverpool.

The Liverpool delegation of 11 including Mayor Joe Anderson visited Birmingham for three days (Oct. 19-21). Much of its itinerary was focused on business and economic development and included visits to Innovation Depot, Southern Research Institute and the Birmingham Business Alliance. The group also took time to visit the Samford campus and to enjoy a dinner at the home of President Andrew Westmoreland and his wife, Jeanna.

To mark the occasion, the Liverpool group received a painting of the Birmingham skyline by Samford artist Larry Thompson, associate dean for visual arts, at the dinner.

“Many of us at Samford are honored to have played supporting roles in launching the agreement between the cities of Liverpool and Birmingham,” said President Westmoreland.  “Two years ago Jeanna and I were guests at Liverpool Hope University, hosted by Gerald Pillay, the president of the university.  During our time with Dr. Pillay and other new friends in Liverpool, we discovered a range of connections between our cities.”

Samford chief marketing officer Betsy Holloway was one of three delegates from Birmingham who visited Liverpool with Mayor Bell in June of 2014 at the start of negotiations for the agreement. She serves as chair of the United Kingdom Committee of the Birmingham Sister City Commission.

“It has been an honor to play a role in establishing this new Sister City relationship for Birmingham,” said Holloway. “I’m convinced that the connections will lead to significant cultural, educational and commercial opportunities for each of our communities.”

The Birmingham-Liverpool agreement is part of Sister Cities International, a nonprofit citizen diplomacy network creating and strengthening partnerships between U. S. and international communities to increase global cooperation at the municipal level, to promote cultural understanding and to stimulate economic development.
Samford is a leading Christian university offering undergraduate programs grounded in the liberal arts with an array of nationally recognized graduate and professional schools. Founded in 1841, Samford is the 87th-oldest institution of higher learning in the United States. The Wall Street Journal ranks Samford 1st nationally for student engagement and U.S. News & World Report ranks Samford 66th in the nation for best undergraduate teaching and 104th nationally for best value. Samford enrolls 5,683 students from 47 states and 19 countries in its 10 academic schools: arts, arts and sciences, business, divinity, education, health professions, law, nursing, pharmacy and public health. Samford fields 17 athletic teams that compete in the tradition-rich Southern Conference, and ranks 3rd nationally for its Graduation Success Rate among all NCAA Division I schools.
Director of Communication
Holly Gainer
Hgainer1@samford.edu
912-344-8443