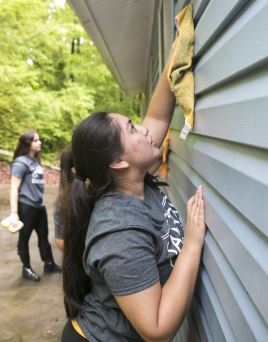 Samford University students logged 716,902 hours serving the community during the 2014-15 academic year, according to a new community engagement report compiled by Samford’s Frances Marlin Mann Center for Ethics and Leadership.

The report shows a significant increase over the 583,198 hours reported during the previous year.

Community engagement and service-learning have been part of Samford for decades, according to Mann Center Director Drayton Nabers. The purpose of the report is to “quantify and describe the current involvement of Samford students and employees in our community.” Both co-curricular volunteerism and service that is integrated into academic coursework are included, providing “a well-rounded narrative” of Samford’s commitment to local and global communities, he explained.

The total value of Samford students’ community engagement was $16.5 million, based on the estimated value of volunteer time according to Independent Sector. Samford’s overall economic impact on the region is $335 million.

In addition to their service hours, student groups raised $257,122 in charitable donations to a variety of causes.

More than 180 different academic courses involved service-learning components. In addition, Samford worked with 66 community partners and other nongovernment organizations around the world.

The Cumberland Public Interest and Community Service student organization in the Cumberland School of Law received the 2015 Pro Bono Award from the Alabama Bar Association for contributing more than 1,000 hours of community service.

The American Pharmacists Association has recognized Samford University’s McWhorter School of Pharmacy as one of the top five institutions nationally for student participation in the APhA Pharmacists Provide Care campaign.

Students in Samford’s interior architecture department designed a multipurpose space for Camp Chacauco in Ecuador. A team of students, led by faculty member Preston Hite, did a site visit in January 2015, and students returned in June to help with construction of their designs.

In January, Samford announced a new four-year undergraduate honors initiatives, the Micah Fellows Honors Program for Christian Service and Community Engagement as an “intentional experiences that connects students to the world around them,” Nabers said.

“The Mann Center is pleased and honored to have responsibility for the development of Samford’s community partnerships,” Nabers added. “The scope of our present community engagement endeavors is already massive – over 715,000 hours of student activity annually.  The Mann Center’s challenge is to enrich the value of this service for both our students and partners.”

The report comes simultaneously with the appointment of Allison Heidbrink Nanni as Samford’s new full-time director of community engagement. Nanni has more than 20 years of nonprofit and social justice experience. She will be the primary contact for community engagement and service-learning initiatives at Samford through the Mann Center.