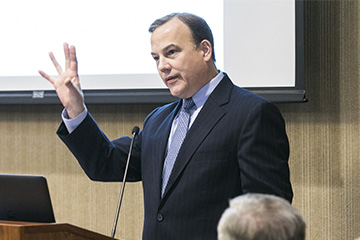 Samford University’s 2015 Woodrow Wilson Visiting fellow Clyde Tuggle, senior vice president and chief public affairs officer for the Coca-Cola Co., told students that we live in a day and age where there are no secrets, and that any company doing business in a far away corner of the world cannot hide its business practices because of instantaneous social media platforms.

He also talked about how a company’s integrity matters. If you mess up, you should own up and make it right.

“Authenticity is plaguing and inspiring America,” said Tuggle. “People are desperate and are looking for the real thing in life and in the way companies do business.”

Tuggle added that there were four key areas that companies should consider when doing business in today’s society:

While on campus, Tuggle spoke to the Brock School of Business sports marketing class. He told the students that the Coca Cola Co. has always been at the forefront of social change.  He told students that the company was one of the first that used African-American athletes in sports marketing ads, and that the company was playing a huge role in affecting change with FIFA, the International Soccer Federation.

At dinner with Brock Scholars, he talked about his professional life, ethics in the business environment and the intricacies of working overseas. He was interested in hearing about Samford students, which books influenced them and their plans for their careers.

In a journalism and mass communication department advertising class, Tuggle talked about Coca-Cola’s struggle with the link between Cokes and obesity. He told students that they surveyed a number of mothers who purchase products for their children and found that mothers would be more likely to purchase Cokes if they were in smaller serving sizes. The eight-ounce packaged Coca-Colas are now one of the company's best-selling products. Tuggle also stated that the company recognizes that it needs to be a leader in solving the problem of obesity.

“We did this to ourselves. For years, we encouraged the overconsumption of soda by encouraging the purchase of larger cup sizes and product. Now we’re having to lead the way to lower the consumption of soda,” he said.

During his visit, Tuggle also addressed the Samford Network Breakfast, a group of Birmingham-area business leaders. He spoke about doing business in foreign nations and the role that the company plays in its sponsorships around the world.

Tuggle is one of many visitors to campuses nationwide through the Woodrow Wilson Program. For the last 35 years, the Woodrow Wilson Visiting Fellows program’s mission has been to bring prominent diplomats, journalists, business leaders and other nonacademic professionals to campuses across the United States for substantive dialogue with students and faculty members. Samford University has participated in this program sponsored by the Council of Independent Colleges since 2010.