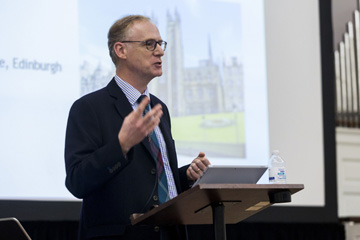 Samford University’s Center for Science and Religion hosted a lecture by physicist Mark Harris Nov. 18 funded by a grant from the John Templeton Foundation.

Harris, lecturer in science and religion at the University of Edinburgh, is interested in the complicated ways that science and religion relate to each other, especially in questions about the nature of reality. In addition to his work as a physicist, he also has served as chaplain at Oriel College, Oxford University, and as vice provost of St. Mary's Cathedral, Edinburgh.

A lifelong Christian, Harris said that he used to erect a wall to separate science and Christianity in order to prevent conflict between them. But after becoming ordained in the Church of England, his research revealed to him that the relationship between the two is much more complicated. This is true even in the case of miracles, where one would expect the divide to be absolute, he explained.

Harris disagreed with David Hume’s definition of a miracle as “a transgression of a law of nature by a particular volition of deity or by the interposition of some invisible agent.” Hume’s definition implies that nature is fixed and closed, a view that is inconsistent with major revolutions of science in the 20th century. It also implies that God is both divine lawmaker and lawbreaker. Harris said that isn’t logical.

Harris defined miracles as reported events which, it is claimed, were caused directly by a transcendent power. In this definition, Harris said, miracles do not necessarily have to contradict the known laws of science. Rather, some miracles might simply be in the timing. For example, the Jordan River has briefly stopped numerous times due to earthquakes. If such an earthquake were to happen at precisely the time needed for the Israelites to cross, then it becomes a miracle.

Harris then discussed the role of miracles in the ministry of Jesus. Miracles are key to understanding Jesus’ identity both in the New Testament and other biblical literature, but they take different forms and can be hard to categorize. Some have tried to explain away Jesus’ miracles by saying for example that the feeding of the 5,000 could be described as one person being generous and thus setting an example for others. But other miracles, such as the Transfiguration, go beyond our knowledge of the natural world, Harris explained.

For all such speculation and rationalization, Harris said, it doesn’t really matter if we think particular miracles either contradict science or are consistent with it. Science, after all, still has much more to learn about the world. The important thing, he said, is that all these events point to the significance of Jesus, illustrate his teachings and demonstrate his power. Christians, Harris said, should not only keep asking themselves what they believe about the miracles of Jesus with respect to science, but also what they signify about Jesus himself.

Earlier in the day, Harris spoke at a pastors conference cohosted by the center and Samford’s Beeson Divinity School.

Aly Hathcock is a journalism and mass communication major and a news and feature writer in the Office of Marketing and Communication.

With additional reporting by Josh Reeves, project administrator in Samford’s Center for Science and Religion.