Published on November 7, 2015 by Mary Wimberley   Share this on: 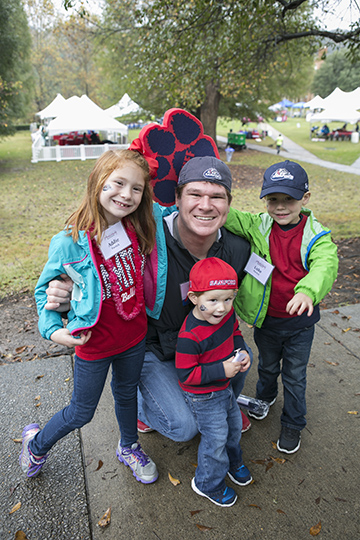 Rain fell off and on all day long, but the wetness could not dampen the spirits of the Samford University faithful at homecoming Saturday, Nov. 7. The day was filled with reunions, special lectures, music and the joyful laughter that comes from friends with a shared tradition. A poncho-clad crowd in Seibert Stadium cheered the Bulldogs to an impressive 43-0 win over homecoming opponent Clark Atlanta.

Of interest to many was a morning retirement reception honoring Special Collection librarian Elizabeth Wells for her 40 years of service. Scores of former students and colleagues filled the library lobby to thank her and wish her well.

Alumna Cindy McMurtry Johnson of Harpersville, Alabama, said “Liz” helped her research term papers for a 1984 master’s degree in history. “She is very knowledgeable, but she gives you information in a way that doesn’t make you feel stupid,” said Johnson, longtime Woman’s Missionary Union librarian who has counted Wells a friend for almost four decades.

Outside the library, umbrellas formed a colorful backdrop for an A Cappella Choir concert. Listeners included former choir member Tabitha Ivey, a 2014 graduate who also attended the Friday night vespers service that included the choir’s performance of “Beautiful Savior.”

Per tradition, she and other choir alumni joined current members in singing the special hymn. “It was a special treat to sing alongside those that I am still close to, and to be a part of the choir tradition to join in as an alumna,” said Ivey, who teaches music at a Birmingham school.

Tailgating under tents on the campus quadrangle offered time and space for many departments and organizations to host meals and fellowship.

At the 25-year reunion tent, members of the Class of 1990 agreed that time had flown, with only a few comments about graying hair being spotted on some classmates. Former roommates David Corts of Atlanta, Georgia, and Lee Manly of Tulsa, Oklahoma, visited in person for the first time in a while.

Manly said he enjoyed seeing longtime friends and admiring the growth taking place on campus.  “Cooney Hall is beautiful,” the marketing graduate said of the new home for Brock School of Business. “I had heard about it but couldn’t imagine how nice it is. It will be a wonderful place for students to spend time and study.”

Corts, an economics graduate, agreed that homecoming is a great time to catch up with old friends and see the changes on campus. “I see places that I recognize and know well, but with renovations, such as the familiar library with additions that came after I graduated,” he said, adding that he enjoys seeing how a new generation is using the space.

At the neighboring 10th anniversary reunion tent for the Class of 2005, Holly Lee Zampieri entertained her 2-year-old son while she reminisced with former classmates and Alpha Delta Pi sorority sisters.

“It’s fun to see friends and meet their husbands and kids, the whole package,” said the nutrition and dietetics graduate who had flown in with her family from their home in Denver, Colorado.

Meanwhile, members of the 50th anniversary Class of 1965 enjoyed a luncheon and special program in the university center.

The Alumni Association tent, where graduates from various years chowed down on barbecue, banana pudding and sweet tea, was lively with the sounds of Shades Mountain Air bluegrass band.

Special events during the day included the grand opening of the art department’s new Art Lofts space, and induction of the journalism and mass communication department’s Wall of Fame honorees.

An afternoon highlight was the action in Seibert Stadium, where game spectators applauded the Bulldogs as well as a number of special announcements and introductions.

Also earlier in the week, Lauren Elizabeth Sims and Walker Edmondson were crowned homecoming queen and king at the student-sponsored ball on Thursday, Nov. 5.  Sims is a senior journalism and mass communication major/Spanish double major from Wildwood, Georgia.   Edmondson is a senior history/religion double major from Oneonta, Alabama. For more on Samford’s 2015 homecoming court, click here.

A special on-field presentation recognized the $43,000 that homecoming reunion committee members from the classes of 1965, 1990 and 2005 had raised to benefit Samford students.

Lucy, a dog owned by 1996 alumna Heather Swanner, was named winner of this year’s pet photo contest. The competition featured 18 dogs and cats who competed via social media to raise support for 18 different Samford funds and scholarships. Lucy raised more than $7,200 for the D. Jerome King Scholarship.

After a full day of events, many alumni still looked forward to evening parties and reunions, including Pi Kappa Phi’s 90th anniversary celebration and Orlean Bullard Beeson School of Education’s centennial celebration dinner, which will recognize 100 Learning for Life honorees.