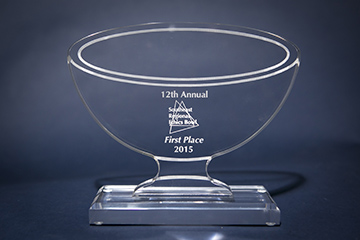 The six-member University Fellows team defeated the U.S. Naval Academy in the championship match Saturday, Nov. 14, in St. Petersburg, Florida, to take the regional title. The national competition will be Feb. 18–21, 2016, in Reston, Virginia.

He also commended team coaches Mike Janas and Wilton Bunch, who, he said, spent two hours a week teaching the team how to make ethical arguments about a wide range of complex issues, including the preservation of antiquities, antivaccination taxes, species preservation and informed consent for the medical treatment of children.

In the championship match, the Samford team debated two topics: what the Austrian government should do with Hitler’s birthplace, and how to handle the looting of antiquities from Syria and Iraq.

“Navy was a well-prepared, very polished and experienced team. So were we,” Johnson said.

“In the final case on the protection of antiquities, our students benefited from their University Fellows education in the Western intellectual tradition,” said Johnson, noting that Hendrickson’s background as a classics major also contributed to their success.

The Samford team, he said, had bonded closely after some difficult near-wins last year and had committed to sticking together this year.

“I’m very happy to win, but I am even more proud to have colleagues who work so hard for the success of our students, and students who compete with decency, sportsmanship, good manners and good humor. More than one student said to me, ‘I really want to win this for Samford,’” Johnson said.

Twenty schools from seven Southeastern states were represented at the regional event.