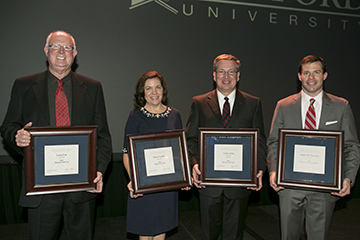 In welcoming the more than 200 guests, the Samford Alumni Association noted that the evening was continuing a tradition that dated to the 1860s of alumni returning to campus for a formal banquet. The event, a candlelight dinner held for decades at spring commencement, was revived 12 years ago at homecoming.

The highlight of the evening was recognition of the university’s three Alumni of the Year and the Outstanding Young Alumnus. Honorees were Karen Duncan Carlisle ’88, W. Todd Carlisle ’88 and J.D. ’91, Larry Cox ’72, and Andrew Patterson ’05.

The Carlisles, who are from Birmingham, related a story of meeting at the first football game of their freshman year. Todd remembered the moment and the buttons the students received to wear at the game. He later gave his button to Karen for an anniversary, although she admitted not remembering that first meeting.

Karen had a career as a physical therapist, and is now an active church and community volunteer, including several areas of service at Samford. Todd is a managing partner for the Birmingham law firm Sirote & Permutt. As an added homecoming celebration for the family, their daughter Mary Beth was part of the 2015 homecoming court.

Cox attended Samford on a football scholarship before entering a successful career as a dentist in North Alabama. He played on Samford’s championship team in the early 1970s.

“It was really rewarding for me to be on a football team that accomplished so much,” Cox said. “So many deep-seeded personal relationships were founded in that team, and to this day we keep in touch with each other.”

Patterson, who is a partner and executive vice president for a Birmingham commercial real estate development company, was celebrating the 10th anniversary of his class.

“Samford did a great job of preparing me for the postgraduation environment,” Patterson said in his video acceptance at the banquet. “[Samford] helped to make me a well-rounded individual.”

In his remarks, Samford President Andrew Westmoreland noted that the connection across the generations is what is important to Samford people.

“It is the connection back and forth among generations that makes a difference at Samford,” he said. “I’m not afraid for the future because we will continue for generations to come for this institution to make a difference in the world.”

Homecoming continued on Saturday and Sunday with a full schedule of events.