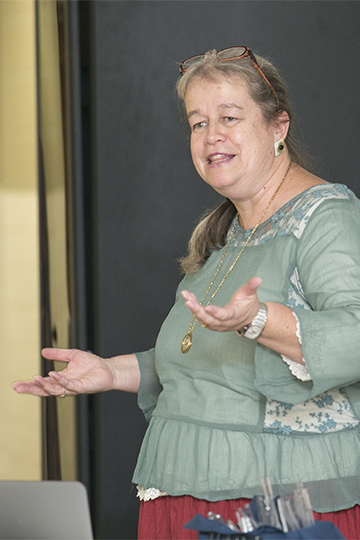 The audience for Williams’ presentation included current students, faculty and many alumni.

“I was so pleased to see so many people in the audience that were an actual part of the history I was speaking about,” said Williams.

For a time in the 1970s and early 1980s, the department was dismissed from campus and only existed through a few English department courses. In 1985, professor emeritus Jon Clemmensen was asked by then–university president Thomas E. Corts to bring the journalism department into the modern era.

The last three JMC department chairs also spoke in a panel discussion. Clemmensen, David Shipley and current chair Bernie Ankney shared how they came to Samford along with a few comical anecdotes about their time as department chair.

Ankney estimated 1,000 graduates have gone through the department since 1985. The department is ranked 43rd nationally by College Factual/USA Today. It is also one of three largest undergraduate departments on campus.

“Our program is no longer exclusive to Alabama or the South. We are becoming a national program,” said Ankney.