Sounds of the Season Planned at Samford 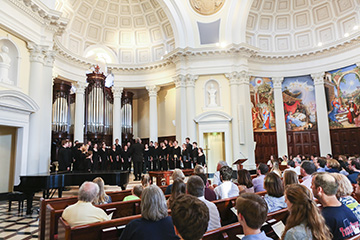 Samford University’s A Cappella Choir might be found singing in European cathedrals, winning international competitions, or performing in churches and concert halls around Birmingham.

But once a month, they perform on campus, filling Andrew Gerow Hodges Chapel with prayer, liturgy and song in the Choral Vespers Series. On Friday, Dec. 4, expect the 36 singers to direct their voices toward the Advent and Christmas seasons.

Since 2010, the choir has been led by Philip Copeland, associate professor and director of choral activities. Copeland also leads the Alabama Symphony Chorus, music ministries at South Highland Presbyterian Church and Bells of Buchanan at Samford. Only the sixth director in the choir’s 76 years, he follows in the footsteps of Timothy Banks, Milburn Price and Gene Black.

During his tenure at Samford, Copeland and the choir have won seven awards at Florilége Vocal de Tours competitions in France, where they competed against choirs from four continents. They won another prize at the 2014 Ave Verum International Choral Competitions in Baden, Austria, and still another at the Fleischman International Choral Competition in Cork, Ireland. In 2013, the A Cappella Choir was one of 11 choirs to perform at the National Collegiate Chorus Organization Conference in Charleston, South Carolina.

Michael Huebner is a news and feature writer for the School of the Arts.