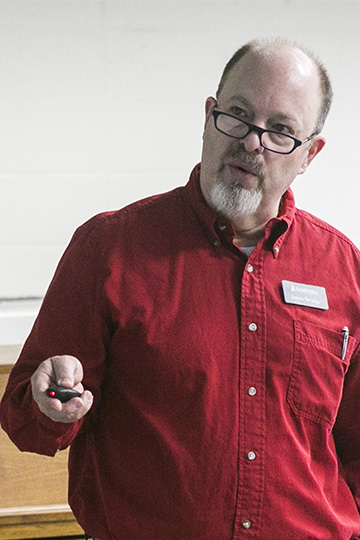 Each year, Strange, in conjunction with other U.S. universities and the Institute for Galilean Archaeology, leads a team of students and other volunteers on an archeological dig in Shikhin, a city just north of Sepphoris in the Galilee region of Israel. Samford students and community members have been digging in this city since 2011. In 2015, the team uncovered what could be part of a synagogue with two cisterns. Strange hypothesized that this synagogue was built in the second century after the original building had been destroyed.

In his lecture, Strange posed the question as to whether or not Jesus and his disciples were peasants. In the first century, common characteristics of peasants included more than one industry per person, small-scale production with little to no surplus, conservative worldview, economic exploitation by a larger more powerful culture, constant danger of economic devastation and the rarity of travel.

The answer to this question came with unclear results, he said. People within this Galilean area would have met some but likely not all of these criteria. For example, pottery remnants found during excavation show that Shikhin was an oil lamp manufacturing site for Galilee. The city served as a production center for two types of mold-made lamps and likely exported these around the region. This required there be a surplus of materials and necessitated travel.

Strange also pointed out that during his time of ministry, Jesus would have had to rely on the hospitality of others, since he traveled extensively. This suggests that Galileans did not necessarily uphold a conservative worldview and weren’t suspicious of outsiders.

At the same time, Strange suggested that first-century Galileans did exhibit many of the other characteristics of peasants, such as having more than one industry per person.

In the end, Strange concluded that we cannot fully know whether or not Jesus and his disciples were peasants.

The next Samford Summer in Israel trip is tentatively scheduled May 19–June 20, 2016, and archaeological dig teams will work to expose more of the Shikhin lamp workshop and synagogue.

Aly Hathcock is a journalism and mass communication major and a news and feature writer in the Office of Marketing and Communication.