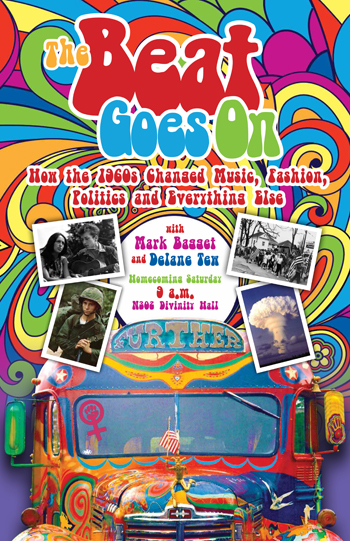 The Beat Goes On Event and Course Poster

As Samford University’s Class of 1965 celebrated its golden anniversary at Homecoming 2015, professors Delane Tew (history) and Mark Baggett (English) offered a look back at the outsized cultural influence of that era. The pair previewed their upcoming course, The Beat Goes On: How the 1960s Changed Music, Fashion, Politics and Everything Else, as part of homecoming celebrations Saturday morning.

Tew said she immediately thought of the course when Howard College of Arts and Sciences dean David Chapman encouraged faculty to explore interdisciplinary courses. “It was such a pivotal moment in American history that I knew I would love to teach it,” Tew said.  “I also knew that students would get a broader scope of the whole decade if they could see it from the perspective of both history and another discipline.”

Tew knew that Baggett had a longstanding interest in the era. In fact, Baggett led a similar course in the early ’90s, complete with a mock protest in Ben Brown Plaza. “I thought students were feeling the spirit of the Sixties,” he said. The generation after, the early millennial, didn’t seem as interested, he said, but “now I think there is a warming up.”

The pair has created an interdisciplinary multimedia course rich in the music, film and newsreel footage of the revolutionary decade. Their preview at homecoming gave a sense of the overwhelming cultural change of the 1960s, but also emphasized the remarkable unity of purpose in what began as individual movements. From the Civil Rights Movement and Free Speech Movement of college campuses, through the antiwar movement and on to the excesses of counterculture, the professors highlighted the push for personal and collective freedom. Rock and roll, the folk revival and protest music provided the soundtrack, of course, and were bound to all the other revolutions.

Many in the audience were at Samford as students and faculty in the period and recalled the university’s own changes. Samford students and faculty took part in the Civil Rights Movement, both off campus and on, and by the early 1970s were leading their own battles for free speech. But even as the world focused on the racist violence of “Bombingham” in the first half of the decade, that world seemed separate from daily life on campus and in many neighborhoods.

“We didn’t recognize much of a protest movement until we went off to graduate school,” said Jack Duncan ’65. But he and his wife, Judy, were nontraditional students as a married couple, and both worked downtown when they were not in class. They recalled the difference between suburban Birmingham and the civil rights protests changing the world on 4th and 5th Avenues. Even other parts of Birmingham were quiet. “You could drive up and go down 2nd and 3rd Avenues, just go about your business and not realize what was going on,” Judy said. “There is the good question,” Jack said. “How were we so unaffected by such a monumental event taking place around us?”

That’s just one of many questions Tew and Baggett will address with a new generation of students in their new course next spring.