Published on January 27, 2016 by Jimmy Lichtenwalter   Share this on: 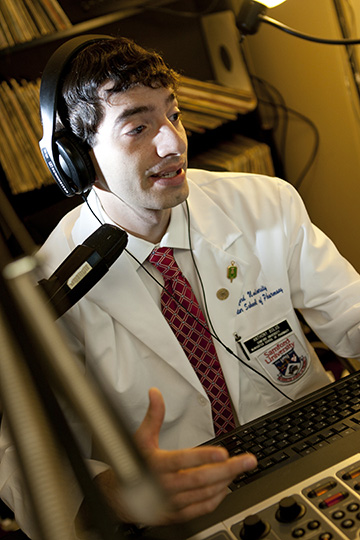 What began five years ago as a research project has grown into a passion and a weekly part-time commitment for Anthony Bolus.

In addition to his career as a full-time pharmacist and clinical coordinator at Family Medical Services in Bessemer, Alabama, Bolus also hosts Healthy Dose, a weekly pharmacy-centered radio show on Samford University’s radio station WVSU-FM. The show airs at 5 p.m. CST on Tuesdays.

“I join two of my favorite things: pharmacy and radio,” he said.

Bolus graduated from Samford’s McWhorter School of Pharmacy in 2013. While he was still a student and working for WVSU, he created Healthy Dose for a project and ran the show for two years.

Since graduating, Bolus secured the rights and trademark to his program and offered Samford a chance to be part of the show. The university made an agreement with him for a year’s worth of weekly shows. Healthy Dose began airing again on WVSU in October 2015 and has been aired weekly since.

“Every program, I’m showcasing different disease states and covering new things pharmacists are doing beyond filling prescriptions,” Bolus said. “I’m just trying to create awareness of the profession. I want to let legislators and regular people know who pharmacists are and what they do.”

Bolus uses his connections at McWhorter School of Pharmacy for his show, often featuring the school’s professors and their research on Healthy Dose.

“The professors get to showcase themselves, the school and Samford University overall,” Bolus said. “It is helping in all factors.”

Each show runs 5–10 minutes. While Bolus works with Andy Parrish, WVSU’s general manager, he is the program’s host, producer, editor and creator. Healthy Dose has been featured on Birmingham’s CBS affiliate and in B-Metro magazine.

While Healthy Dose is now just a hobby for Bolus, he is interested in seeing how far he can take the show.

“I’d really like to send it out nationally,” he said. “This is shooting for the stars, but I’d love NPR or something to pick it up.”

According to Bolus, his purpose for producing the show is to help his listeners with three things: understand what a specific disease state is about, learn what pharmacists can do beyond filling prescriptions, and how to be healthier and live better lives.

“If I have affected one person who has made a change for the better, I’ll be happy,” Bolus said.