Samford Students Take Opera ‘On the Road’ During January 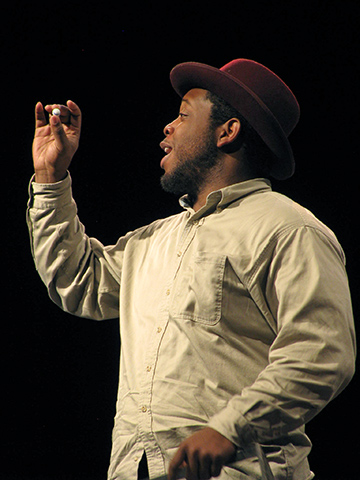 The opportunity to share live opera with area school students during a winter outreach tour is something that the School of the Arts performers and Samford Director of Opera Kristin Kenning look forward to each year.

“It’s important to travel around the community to share music and theatre with students who might not have the opportunity to come to Samford to be a part of the great arts events we do here,” Kenning said.

“We especially want to introduce high school students to opera and answer any questions they have,” said Kenning, who finds that high schoolers are often confused about what to do after they graduate. “We want to make sure they know music is a wonderful path to take. It’s hard to imagine yourself on a path if you don’t have role models in that field.

“We hope they gain a greater appreciation of music and theatrical performance from our tour, and that we are a shining light to those considering pursuing a musical future. We also want to make sure that we are serving all areas of our community with a mission of sharing the joy of music with young adults.”

Kenning is confident that the Samford students benefit from having multiple chances to perform. “They are able to fully develop their characters and relationships on stage during the tour,” Kenning said. “I think their best performances all year happen during their special week of outreach to our community.”

Senior vocal performance major Abby Head, a veteran of two outreach tours, confirms the value of singing in spaces as varied as libraries, classrooms and gym floors. And sometimes, although the audience is seated close by, attentions may wander.

“The kids at the schools are great, though. They were almost always engaged in the performance and had some really good questions for us,” Head said. Frequent questions included what the Samford students plan to do with a performance major, and what their parents think about it.

“And they liked to ask whether I was eating real food on stage,” said Head, who in her role as Adele, the maid in Die Fledermaus, consumed fried chicken and ginger ale. “I was.”

Some of the performers spent early January at the National Opera Scenes Competition in Indianapolis, Indiana, from which they brought home a prestigious second-place award.

Samford Opera’s next production is Leonard Bernstein’s On the Town April 28 and 30 and May 1 in Harrison Theatre. The schedule includes a special morning performance for local schools April 28.