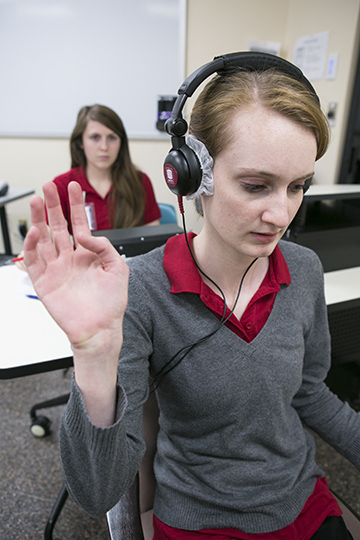 Samford University’s Department of Communication Sciences and Disorders was honored at the Speech and Hearing Association of Alabama’s recent annual convention in Birmingham.

Students received the Student Membership Award, unseating another university that had won the award for more than 10 consecutive years. Samford has 22 students who not only became members of SHAA, but also volunteered at least four hours of personal time to the convention.

“I am so proud of the undergraduate and graduate students who have come to understand that it is important to give back to the profession,” said Margaret L. Johnson, chair of Samford’s Department of Communication Sciences and Disorders. “The time these students spent volunteering at the annual convention was so appreciated by the executive board of SHAA. The executive director commented that the organization could not do what it does without our student members, and I agree.”

Caroline Todd, a student in the Master of Science in Speech Language Pathology program, was also honored with the organization’s Student Recognition Award. Todd was selected based on her commitment to academics, her leadership skills and overall professionalism.

“It is exciting to see that although the Department of Communication Sciences and Disorders is relatively new at Samford, it is quickly establishing a reputation for its commitment to preparing practitioners who are focused on service to others and their profession,” said health professions dean Alan Jung.