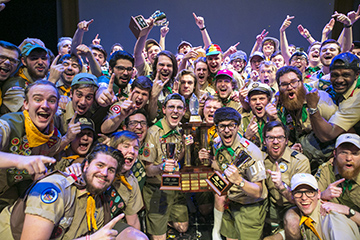 Dudes-a-Plenty returned to the winner’s circle for the first time since 2012, taking the coveted Sweepstakes Trophy during Samford University’s annual Step Sing Feb. 11–13.

The male group, which forms annually just for Step Sing, portrayed Boy Scouts in the wilderness for its show, “Bring Them Home.”

“It feels so good to help these guys earn what they deserve,” said show codirector Stephen Rice, a senior religion major from Oldsmar, Florida. Other codirectors were Hunter Gibbs, a senior biology major from Nesbit, Mississippi, and Garrett Greer, a senior political science major from Signal Mountain, Tennessee.

In addition to Sweepstakes, the group won judges’ awards for creativity, music and choreography, and participants’ choice awards for best music, most entertaining and best choreography.

First runner-up was IGnite, a group of greek members and independent women who also form just for Step Sing.

Its show, “Pairs,” was based on the biblical story of Noah and the ark. Show directors were Eden Long, a junior journalism and mass communication major from Birmingham, and Jordan Simpson, a junior psychology major from Murfreesboro, Tennessee.

Independent Ladies, a group that also comes together just for Step Sing, won a new character award, presented for the first time by the Step Sing committee, Office of Student Life and Wright Center staff, for the group that displayed “a spirit of congeniality and character on the stage and behind the scenes” during Step Sing. Show directors were Jessica Petty, a senior musical theatre major from Mandeville, Louisiana, and Kathleen Sharp, a senior journalism and mass communication major from Boca Raton, Florida.

Step Sing participants raised $13,102 — believed to be a record — for the 2016 Step Sing philanthropy, Kahaila, a church and community ministry in East London. Members of Alpha Omicron Pi sorority continued a multiyear tradition of raising the most of any participating group with $4,904.

Liz Simmons, a 2006 Samford alumna, is involved with the ministry and was present for Step Sing weekend.

“On behalf of Kahaila, thank you for providing restoration and redemption for the women of East London,” Simmons said. “It truly is amazing what you have done.”

More than 900 students representing 15  groups performed four shows in the 66th production of Step Sing. The show is totally student-produced and professionally judged. It is considered one of Samford’s most cherished traditions.

“This was an incredible experience,” Carlisle said. “To see how the groups developed from our first meeting about themes last fall to the hard work on stage was so rewarding.”

The experience was “exhilarating,” Nelson added, “to see my friends and the fruits of their hard work come together.”

Former show directors, choreographers, arrangers and other alumni attended a special reception on Friday evening hosted by Samford’s Office of Alumni Programs. The reception included displays of costumes and programs from previous years, as well as lists of regulations that showed the evolution of the acts through the years.

Craig Hyde, a 1994 graduate who designed the Sweepstakes Trophy that is still in use, was interviewed during intermission of Saturday night’s performance. Hyde said he was tasked with designing a new trophy when the previous sweepstakes trophy filled up with winners’ names.

“It is surreal now to see the trophy,” Hyde said. “In my mind, I saw it when it was pristine, and now I get to see it worn and in the hands of all of the winners.”

In addition to four live performances on campus that attracted about 8,000, there were  more than 9,000 connections, with an estimated total audience of more than 20,000, connected to live streams of the three evening shows. Several alumni and parent groups around the world hosted watch parties for the live streaming, with 151 parties with 1,299 participants registered in 20 countries, including students studying at Samford’s London Center.

Step Sing originated on the steps of Renfroe Hall on Samford’s East Lake campus before the university relocated to its present location in the late 1950s. It was held in the gymnasium of Seibert Hall and other locations around the Homewood campus before finally landing in Wright Center in 1976.This was the 45th anniversary for the Sweepstakes Award.