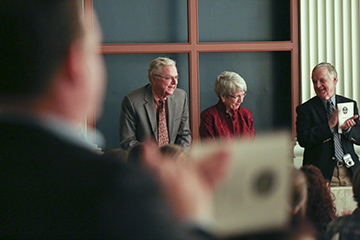 Samford University has announced a $1 million endowment to support the strings program in the School of the Arts.

The gift, from husband and wife Wilton Bunch and Victoria Dvonch, will provide financial support for the Samford Strings Quartet. The announcement came during a Feb. 23 concert featuring the quartet.

Bunch and Dvonch have been longtime supporters of Samford arts. A medical doctor, Bunch is professor of ethics and philosophy at Samford. Dvonch also is a medical doctor and later taught science in Hoover (Ala.) City Schools.

Their support for the strings quartet grew from Bunch’s experiences playing bass in the Samford Orchestra for many years. Earlier, they provided funding for the Brenda Joanne Bunch Music Scholarship for low strings.

“The story of Wilton Bunch and his giving is one of the most compelling I know,” said Samford School of the Arts Dean Joseph Hopkins.

“Here is a person who loved music, came to support our students, recognized a need in our orchestra, began studying bass so that he might personally meet that need, and noticed the need for scholarship support in our low string area,” Hopkins added. “As Wilton Bunch models what it means to be an advocate, patron and friend, he is changing the future of our orchestra and strings program forever. We are indebted to Wilton and Vicki for what is and will be one of the most important gifts in our school’s history.”

The endowment will underwrite expenses for the quartet, including travel, student recruitment and significant artistic performances, Hopkins explained, in addition to experiences “celebrating the strings program through other ensembles and performances.”

Formed in 2011, the quartet first played together in England and France. Since then, they have performed for more than 2,500 school students in Tennessee, Indiana, South Carolina, Kentucky, Florida, Georgia and Alabama. At Bunch’s request, they will permanently be known as the Samford Strings Quartet.

“Wilton and Vicki have so many interests in life,” Jeffrey Flaniken added. “I am humbled and thankful that they have chosen to combine two of those interests — their love for Samford University and their love for music — in this most generous gift.”

During the concert, the quartet performed the world premiere of a work composed by Samford music faculty member Joel Scott Davis. As an undergraduate student, Davis had played bass next to Bunch in the Samford Orchestra.

Vespers, which was commissioned by Bunch and Dvonch, consists of three movements, titled “Awakenings — Proclamations,” “Antiphons — Benedictions” and “Jubilations.”

Hopkins also announced that the quartet will perform Oct. 24 at Weill Recital Hall in New York City’s Carnegie Hall. Plans are being formulated for a Samford Arts friends and alumni trip to coincide with the concert.