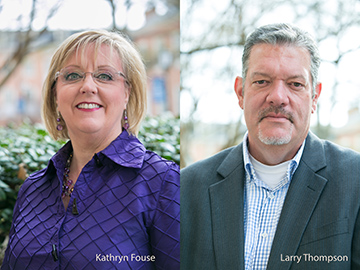 A collaboration between two Samford University School of the Arts faculty promises to meld two artistic disciplines in a unique way. “Aural Vision: Art Inspired by Sound,” plays out Tuesday, March 29, at 7:30 p.m. in Brock Recital Hall on the Samford campus when Associate Dean and Professor of Piano Kathryn Fouse performs Frederic Rzewski’s The People United Will Never Be Defeated. She will be accompanying projected images of paintings created by Associate Dean and Professor of Art Larry Thompson.

The close relationship between music and visual art has long been addressed. Examples include musical depictions of art in Modest Mussorgsky’s Pictures at an Exhibition,  Gunther Schuller’s Seven Studies on Themes of Paul Klee and Scriabin’s brand of “synesthesia” that relates musical tones to colors.

While “Aural Vision” draws on those ideas to a degree, it adds a unique dimension of political overtones, as the title by Rzewski (pronounced “SHEV-skee”) suggests. In particular, the 1975 composition quotes a Chilean folk song by Sergio Ortega that became popular in the years preceding the overthrow of the Salvador Allende government.

Six sets of six variations — not only on the Chilean theme, but also on an Italian revolutionary song titled “Bandiera Rossa” and a German solidarity tune by Hans Eissler comprise the hour-long piece and form the basis for Thompson’s 36 paintings.

“The piece was commissioned for the U.S. Bicentennial and performed at the Kennedy Center,” explained Fouse. “Some of it was a statement by Rzewski against the U.S. government for supporting the rebels overthrowing Allende, which put in power Augusto Pinochet, who turned out to be worse than Allende.”

Thompson has made political statements before with his work. Infanttree Project, currently on display at the Birmingham gallery Space One Eleven, addresses the scarcity of attention given to U.S. servicemen overseas and America’s insulation from the carnage of war.

Prior to that, Thompson participated in a South African project titled Between the Shadow and the Light, which will be exhibited at Samford next year.

But for “Aural Vision,” he departed from his usual style of painting.

“It’s very abstract,” Thompson said. “Normally, I do something more narrative. I’m trying to be faithful and layer the music.”

After his original consultations with Fouse, Thompson decided to do six paintings, one for each set, but it grew into a bigger project.

“I realized that wasn’t going to work,” he said. “I was trying to impose my work on Rzewski instead of responding to the music, so it turned into 36 paintings to go with the 36 variations.”

Fouse, whose career has focused on contemporary piano music, has a long-held interest in the  galvanization of music and visual art. Her doctoral dissertation at the University of North Texas  focused on the Surrealist movement and its influence on American composers.

Will her performance of Rzewski’s music be influenced by Thompson’s paintings?

“It may be,” she said. “I hope to position the piano where I can see the paintings. I see color in sound, and my playing is always influenced by things I see.”

Equally challenging, Fouse said, are mastering Rzewski’s score and getting his ideas across. She described “The People United” as feeling like “a marathon.”

Quoting Rzewski, “The extended length of the composition may be an allusion to the idea that the unification of people is a long story and that nothing worth winning is acquired without effort.”