Haarsma, Ross Agree on Value of Christian Engagement With Science 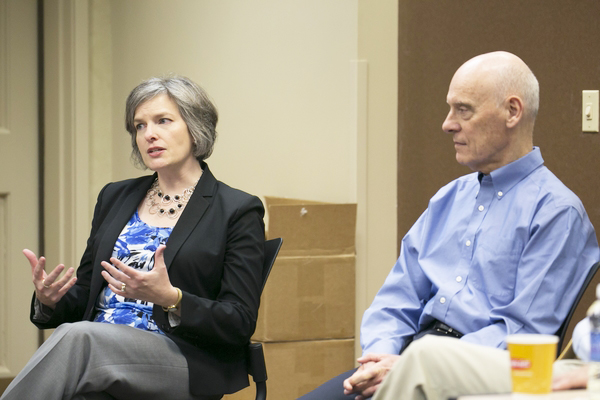 Samford University’s Center for Science and Religion and the Issacher Fund hosted astronomers Deborah Haarsma and Hugh Ross for “a gracious dialogue on evolution” March 2–3.

Haarsma, president of the BioLogos organization, and Ross, president of the Reasons to Believe organization, responded to questions from the audience and moderator Josh Reeves during a public event in Reid Chapel March 3. Their answers illuminated some of the unfamiliar corners of a familiar debate, and revealed the very different ways devout believers reconcile science and religion.

Reeves, project administrator for the center's New Directions in Science and Religion project, said the event was intended, in part, to reassure Samford students who are wrestling with perceived conflicts between science and religion, perhaps for the first time. He also said he chose Haarsma and Ross for their civility toward each other in spite of significant disagreements. “Reasons To Believe and Biologos both model the type of conversation that followers of Christ should have,” Reeves said.

Ross was raised in a non-Christian family and didn’t know Christians until he was in his twenties. He was interested in astronomy by age seven and decided on it as a career by age eight. “I became a Christian through my astronomy,” Ross said. His curiosity about the beginning of the universe eventually led him to a study of philosophy and religion that, with one exception, failed to connect to his scientific interest. He said his reading of Genesis convinced him that “the Bible was consistently and accurately predicting future scientific discoveries.” His faith grew through his scientific education and research, and led him to share his unique perspective on science and religion through the Reasons To Believe organization.

Haarsma was raised in an evangelical Christian family but shared Ross’s early fascination with science. In college, she began to see apparent contradictions between the science of astronomy and the “young-earth” belief that she thought was the only option for Christians. Instead of turning away from one or the other, she sought reconciliation. “As I began to understand the universe better, I grew in my understanding of who God is,” she said. Through Biologos, founded by celebrated scientist Francis Collins, she now helps others understand that science and faith are not mutually exclusive.

Although Haarsma and Ross share a deep commitment to both belief and science, they have in some cases arrived at very different conclusions. Those differences were most clearly on display in their views on creation. Ross finds scientific confirmation of the literal truth of Genesis, while Haarsma reads the creation story as the understandings of a scientifically limited ancient culture. Many other issues the pair addressed — from human evolution to the relative size of seeds — turned on these very different approaches and often ended with agreement to disagree.

The evening revealed important similarities as well. Both astronomers accept the scientific consensus concerning the age of the universe. As Reeves noted, both feel a unique responsibility to maintain a respectful dialogue on the issues. Christians are charged to “call non-Christians to come to peace with God,” Ross said. “How can that happen if we can’t come to peace with one another?”

Haarsma and Ross also agreed that Christians shouldn’t hide from the challenge of science. Haarsma praised the role that faculty at a university like Samford can play in helping devout students work through the same questions she and Ross faced as Christian students of science. Ross added that, in defiance of a popular stereotype, believers have more responsibility to understand creation, not less. “If you’re a Christian, science is not an option,” he said. “It’s a command.”