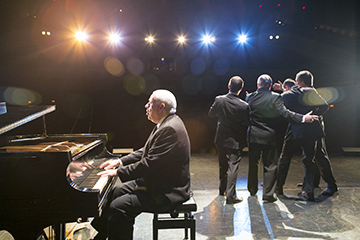 Samford University will honor gospel music legend Hovie Lister and the Statesmen Quartet with the show Wake Me, Lord! Shake Me, Lord! April 8 at 7 p.m. in the Leslie S. Wright Center.

Kenny Gannon, director of Samford’s Wright Center, coordinated this event to pay tribute to the group who revolutionized the music industry. “They had a profound influence on popular music, including Elvis Presley,” Gannon said. “They set a standard for gospel music that is hard to match.”

Junior vocal performance major Austin Foster has been transcribing the Statesmen’s records by ear. “There really is no sheet music out there for any of these songs,” Foster said. “Back in the old days, the Statesmen picked out songs by ear.”

Transcribing is tedious, as Foster spends at least two hours on each song. However, he says the process is incredibly rewarding.

“Once I hear four singers bring my arrangements to life, I am reminded of what an honor it is to have the opportunity to arrange these songs.”

Foster and three other Samford students will perform as “The Samford Diplomats,” a group representing the Statesmen Quartet when they first began.

“The show is somewhat like a time-travelling experience,” Foster said, adding that they hope to “thrill the crowd with the upbeat songs that will have everyone tapping their toes and clapping their hands.”

The other performing groups are the “Samford Revival Quartet” and “Former Statesmen and Friends of Hovie.” The entire show is authentic, complete with choreography, matching suits and genuine harmonies.

Lister died in 2001, but his wife, daughter and son are attending the event. Last year the Lister family invited Gannon to their home and allowed him to visit Lister’s home studio and office.  “Hovie’s hat, coat and backscratcher are still right where he left them,” Gannon said.

The Lister family also made hundreds of previously unseen photographs available for Samford to use in the concert. “They appreciate what Samford is doing and trust us,” Gannon said. “I feel a powerful responsibility to do this right.”

Tickets are available online or at the Samford box office in Swearingen Hall. Tickets start at $25. A “buy one, get one free” discount is available through the month of March with the code BOGOHOVIE.

Rachel Sinclair is a journalism and mass communication major and a public relations assistant in the Division of Marketing and Communication.