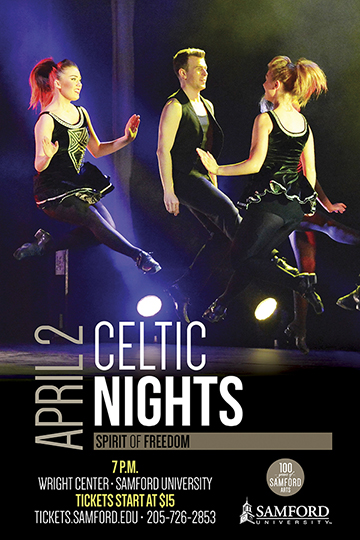 World-renowned Irish musical group Celtic Nights will perform at Samford University’s Wright Center April 2 at 7 p.m. The show, entitled Spirit of Freedom, celebrates the centennial of the Easter Rising of 1916.

The multitalented, 14-member cast consists of singers, dancers, musicians and actors. Producer Michael Durkan explained that the show portrays the authentic folk elements of Irish music and dance in the context of a modern, multimedia experience.

“Spirit of Freedom is a lively, entertaining show that tells an inspiring story as seen through the eyes of its heroes and heroines,” Durkan said. He added that he is “confident that this story will resonate strongly with American audiences — indeed, with all people who cherish freedom, independence and democracy.”

The performance is unique in that it includes stories from the often-overlooked women who played a significant role Ireland’s struggle for independence. Specifically, Spirit of Freedom highlights the story of Grace Gifford and Joseph Plunkett, who were married in the Kilmainham jail only a few hours before Plunkett was executed for his part in the rising.

Coproducer Rebekah Shearer believes that Celtic Nights not only became popular for its exhilarating performances, but also for its tradition of encouraging audience participation. “It becomes a real Irish party, like one would find in a pub,” Shearer said. “It’s not just a show; it’s a friendship. It’s brilliant.”

Tickets are available online or at the Samford Box Office in Swearingen Hall. Guests can receive a special “buy one get one free” offer by using the promo code BOGOCELTIC. Groups of 20 or more can receive a discounted rate by calling 205-726-2853.

Rachel Sinclair is a journalism and mass communication major and a public relations assistant in the Division of Marketing and Communication.