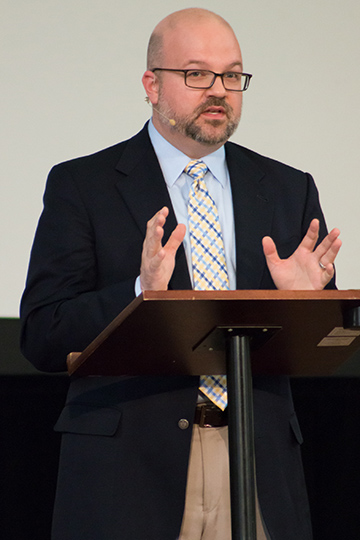 While always at risk of being corrupted by pride or an intellectual substitute for faith, the study of theology matters because, at its best, it is the intellectual expression of the love of God.

Christianity is not a system of theology, rather a way of life, Jorgensen maintained. The discipline of study protects and guides the practice so that its true purpose — genuine contemplation of God — is maintained.

Jorgensen told a class of undergraduate University Fellows that because God is the creator of all things, pursuing knowledge in any field can be a natural extension of one’s love of God. He urged the students to be curious but warned that such a pursuit could have effects that range from trivial to catastrophic. On the other hand, he encouraged student to be studiousitas, which he described as “the well-ordered and life-giving pursuit of knowledge.”

At Birmingham’s Shades Crest Baptist Church, where lectures namesake James Auchmuty was pastor of many years, Jorgensen explored how faith, hope and love ensure efforts to know God. “I am especially fascinated about the way hope protects us from both overconfidence (I’ve got it all figured out) and despair (who knows anyway?),” he said. “Hope embraces mystery, and that is such an important part of knowing God.”

Jorgensen cited early founders, such as St. Anselman of Canterbury and Justin Martyr, whose study of philosophy led to an acceptance of the Christian faith as the faithful way to Jesus Christ.

“I find it fascinating that ancient philosophers were well aware that the human desire for knowledge can become corrupted,” he said.  “Anyone who uses Facebook, Twitter, Instagram or SnapChat knows this is the case. Harnessing our attention and regulating our desire to know may be the moral issues of the information age.

“Knowledge involves everything in us, from the vital principle to the chemical composition of the least cell,” he said. “Mental disorders of every sort prove that it is not the mind alone that thinks, but all of man.” He supported his claim with a quote by Plato, who said “we think with our whole soul.”

In his closing lecture, primarily addressed to the Auchmuty Lectures committee, Jorgensen urged ways that ministers might recapture a vision of Christianity as a way of life where earnest seekers, like Justin Martyr, can discover a living truth.

He offered the group six suggestions for being the church in an “unbiased” age: Become a community of truth seekers (and finders): 1. practice Christianity, 2. embrace your inner self, 3. challenge what he defined and described as MTD — Moralistic Therapeutic Deism, 4. remember the vices, 5. recover the virtues, and 6. resist being “unbiased.”

“Thinking of the faith as bios is not only more attractive to a culture that offers a cacophony of competing claims, but it is also more faithful to the way of Jesus Christ,” he said.

The Auchmuty Lectures were established in 2004 by Shades Crest Baptist Church in partnership with Samford’s Center for Congregational Resources. It honors retired former pastor James A. Auchmuty, a Samford alumnus. The center sponsors lectures, seminars, workshops, and sabbaticals and study leaves for pastors and congregation leaders.