A House is Not a Home: Science, Genesis Tell Different Stories, Walton Says 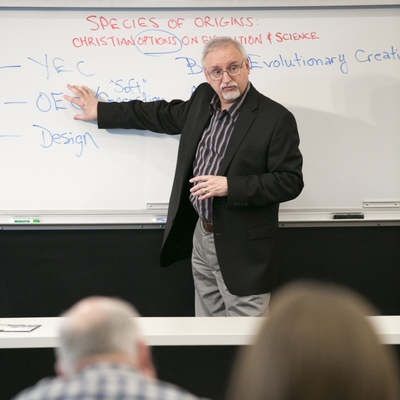 John Walton leads a workshop for clergy during his visit

The lecture, funded by the John Templeton Foundation, offered a culturally and theologically deep consideration of the different aims of the Bible and science.

Walton, a prolific author and professor of Old Testament  at Wheaton College and Graduate School, pointed out that although the message of the Bible is for all, the text addresses a specific ancient culture. “The Bible was written for us,” he explained, “but not written to us.”

Walton described an ancient Near East in which the universe was thought to be a solid sky, in which many cultures believed in multiple gods and could not anticipate modern science and understandings. God didn’t “upgrade them,” Walton said, but spoke to them as they were. So, he said, “We have to read the text the way they read the text.”

Most importantly, Walton said, we have to understand that the ancient Hebrews who were the Bible’s specific audience understood the story of creation as being about order rather than objects. For them, “existence” was about purpose and function in an ordered world. In the ancient context, Walton said, “material reality was not the only reality.” When we now ask what things God created on any given day, “we’re asking a modern question” and overlooking important theology, Walton said. Moreover, he said, the length of a day in Genesis 1 is irrelevant to the age of the universe or Earth because the text does not address material creation.

Walton compared this clash of ancient and modern values to the difference between building a house and making a home. Building a house is an act of material creation, but it does not give the house the deeper purpose and function we associate with the word “home.”

“When scientists talk about origins, they want to study the house,” Walton said. But he suggested that Genesis 1 is not a “house story.” “God did build the house, but I don’t think Genesis 1 is that story,” he said. “Genesis 1, I would suggest, is the home story.”

He compared the seven days of creation to the consecration of an ancient temple. The architecture might require months or years of material creation, but, to the ancients, the more important part of the story is the brief period in which God occupied the temple to rule. “The theology of rest is not the theology of relaxation,” Walton added. The day of rest described in Genesis was not a break from hard labor, then, but the day in which God inhabited his place at “the command center of the universe.”

As to the more specific creation of humans, Walton noted that the Bible does not address scientific mechanisms such as evolution any more than modern science addresses the nonmaterial questions of human creation. He said Adam and Eve were archetypes meant to tell us our purpose in the God-ordered universe rather than document our material formation.

Walton pointed out the many parts of the Bible that refer to humans as dust. “Being born from dust does not preclude being born from woman,” he said. On the other hand, he noted, “Just because we can observe natural cause and effect doesn’t remove God from the picture.”

Walton concluded his lecture by calling for acceptance of different interpretations of the texts and perspectives and cultures he described. “There are a variety of ways to interpret this material by people being faithful to Biblical text,” he said. “And, we should understand that acceptance of science does not require the rejection of the Bible or faith.”

Finally, the scholar he left his audience with a deeply informed and peaceful statement to reconcile a debate that often has not been either: “God made us more than what he made us from.”