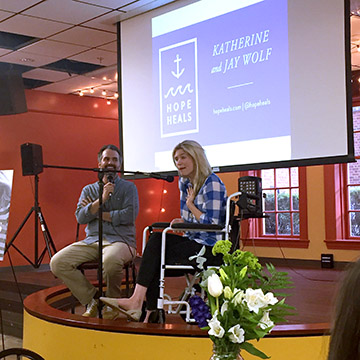 Samford University 2004 alumni Katherine and Jay Wolf laughed with the packed crowd of students, employees, alumni and friends who came to hear them speak. “Our story really did start here [at Samford]. We met upstairs, in the cafeteria,” Jay told the crowd.

Katherine and Jay returned to campus April 18 as a part of their hometown book signing tour, promoting their new book, Hope Heals: A True Story of Overwhelming Loss and an Overcoming Love.

The story behind Katherine and Jay’s ministry has become known to many. The two met and fell in love at Samford. Following graduation in 2004, they married and moved to Los Angeles, California. Jay pursed a law degree, and Katherine sought opportunities in the entertainment industry. In 2008, they welcomed their first son, James, into the world.

Six months later, on April 21, 2008, their lives took a dramatic turn as Katherine unexpectedly suffered a massive brain stem stroke. Although the path that lay before them led her and Jay deep into what they have described as a valley of darkness and despair, they knew the Lord was walking alongside them.

Now, eight years after the stroke, Katherine and Jay are sharing their story of hope and God’s faithfulness.

“The good news is that because of what Jesus Christ has done, because he has been crushed and abandoned, we will never be. And that is our hope — the hope that we are talking about, the hope that heals us,” Jay said.

The years following Katherine’s stroke were not easy. She had 11 surgeries and she had to fight to be able to walk, talk and care for her son.

Through it all, Katherine finds that her circumstances, though unique, have a common denominator with the average person. “We’re eight years out from my stroke, and what is still in my mortal frame is this fascinating set of very specific issues that we all feel on the inside of our bodies,” Katherine said.

“For instance, my face is paralyzed. Yours, most likely, is not paralyzed. However, who doesn’t have issues with their appearance? I don’t always like my seat in life, but who does?

“In a way, I’m just showcasing on the outside what everybody is feeling on the inside. It’s like I got the shortcut to the real stuff because no one thinks I’m okay. No one sees me and thinks all is well. Wouldn’t we all want a T-shirt that says, ‘I’ve been through a lot. Treat me with tremendous care’?”

While at Samford, Katherine and Jay had lunch with a group of communication studies students. A student asked them if they ever thought they would be using their communication degrees in this way. Jay and Katherine looked at each other. “Nope,” Katherine said.

Writing a book and going on a book tour was not on their radar. “The Lord is always preparing us so beautifully for what he has prepared for us, and our lives are no exception,” Katherine said.

Today, Katherine and Jay live in Los Angeles, California, where they work with their ministry, Hope Heals. Last summer, Katherine gave birth to their second son, John Nestor, named after John the apostle and Dr. Nester Gonzalez, the neurosurgeon who saved Katherine’s life.

Sarah Waller is marketing and communication coordinator in Samford’s Office of Alumni Programs and Annual Giving.