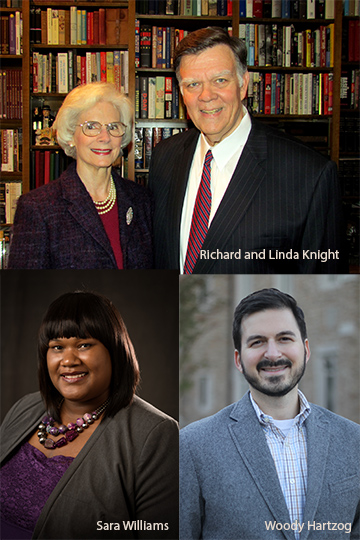 They will be honored a reception on Friday, April 8. Dean Henry C. Strickland III will present the awards.

The Knights, who celebrate their 45th wedding anniversary this year, are the first married couple to receive the law school’s Alumni of the Year awards. The award recognizes their distinguished practice of law, service to the community and leadership in the profession. Both serve on the Cumberland School of Law advisory board. They reside in Nashville, Tennessee.

Richard, a longtime attorney with Hospital Corporation of America, also served as in-house counsel with two life insurance companies and a medical software company, and was general counsel of the Tennessee Department of Health. He was a cofounder and CEO of Tennessee Advanced Neurodiagnostic Imaging Institute.

The Virginia Military Institute graduate holds a master’s degree in health administration from the University of Alabama at Birmingham.

Linda is a partner in the Nashville law firm of Gullett, Sanford, Robinson & Martin PLLC, which she joined after a clerkship with a Tennessee Supreme Court justice. She began her legal career as the first female associate in Birmingham’s Balch & Bingham law firm.

She was a nominee to fill a vacancy on the Tennessee Supreme Court in 2014. She holds a bachelor’s degree from Vanderbilt University.

Young Alumnus of the Year

Cumberland School of Law’s Young Alumnus of the Year award recognizes an outstanding graduate of the last 15 years.

Hartzog, a professor at the law school, is an internationally recognized expert in the area of privacy, media and robotics law. He is a frequently quoted source in national news outlets, and his work has been published in numerous scholarly and popular national and international publications. His book, Privacy’s Blueprint: The Battle to Control the Design for New Technologies, is under contract with Harvard University Press.

A former trademark attorney with the U.S. Patent and Trademark Office and with Burr & Forman law firm in Birmingham, he teaches torts, intellectual property, privacy law and media law at Cumberland School of Law. He is an affiliate scholar at the Center for Internet and Society at Stanford Law School.

Hartzog holds a bachelor’s degree from Samford, a Ph.D. in mass communication from the University of North Carolina at Chapel Hill and a master of laws in intellectual property from George Washington University Law School.

Volunteer of the Year

The volunteer award recognizes a Cumberland School of Law graduate who has provided exceptional volunteer service to the school and its constituents.

Williams, an attorney with Alexander Shunnarah Injury Lawyers in Birmingham, has assisted in multiple facts of the law school program.

As a litigator who represents plaintiffs, Williams has shared her experience with many law students. Since 2009, she has spent hundreds of hours as a volunteer coach for the school’s national trial team. As a result of her coaching, administrators say, the students have excelled and the trial teams have reached numerous successes year after year.

While in law school, Williams served as chief judge of the Trial Advocacy Board, president of the Black Law Students Association, and competed with the national trial team and the American Bar Association’s national mediation team. She holds a bachelor’s degree from Florida State University.

Cumberland School of Law’s reunion weekend activity will continue on Saturday, April 9, with a luncheon and open house for graduates, families and friends, and class reunion gatherings in the evening.