Winning Composition Brewing Up a Storm at Wind Ensemble Concert 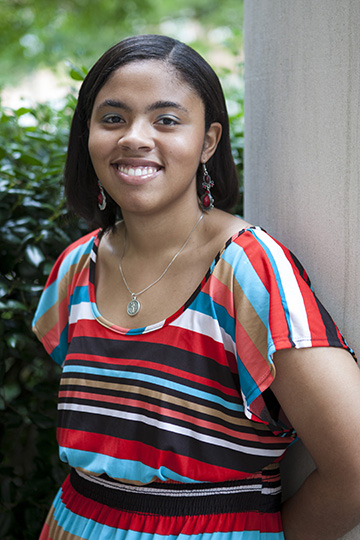 On April 21, a Samford University music student will guide listeners through a powerful tempest that depicts the trials of a ship’s crew as it negotiates a hurricane.

Brianna Ware, a senior music major, will receive the premiere of her new work, titled Hurakan, at 7:30 p.m. at Brock Recital Hall. The work will be performed by the Samford Wind Ensemble, conducted by Associate Professor Demondrae Thurman.

“Hurakan is the name of the Mayan god of wind and storm,” explained Ware. “It is also where we derive the term ‘hurricane.’ It traces the story of a ship and crew who find themselves caught at sea in a dangerous storm.”

The premiere is doubly significant because Hurakan is the winner of an annual composition contest sponsored by Samford’s Division of Music. Now in its second year, the competition was spawned by Samford faculty members Mark Lackey and Joel Davis to give students a live performance of their music. Last year’s competition was won by Chadwick McDowell for Curious Flight for Fragile Wings, also for wind ensemble.

“We have had ways to honor students who were outstanding singers or instrumentalists, but there was a gap,” said Lackey, assistant professor of music theory and composition. “We worked with [Associate Dean] Kathryn Fouse and came up with the idea of a composition contest. I also give a lot of credit to Dr. Thurman, who has been a real champion of this, opening up his Wind Ensemble for the contest.”

Hurakan was recommended for the award for a number of reasons, said Lackey.

“It’s very practicable, yet there were solo passages, tutti passages and places where the texture lightens up,” Lackey said. “She didn’t feel she had to have everyone playing all the time. It has good themes, changing meters and a lot of other good things about it. Will it speak well when it’s actually performed? In our judgment, this one will.”

In addition to its atmospheric turbulence, Hurakan leaves a bit of a cliffhanger. After a majestic beginning, according to Ware, changes in harmony and tonality suggest “something ominous on the horizon. The music suddenly takes a drastic turn, pulling the listener in to the tumultuous hurricane. The audience will later hear a calm, lyrical section that suggests that the ship has reached the eye of the hurricane.”

After a return to the fast, agitated hurricane theme, it ends dramatically.

“Did the sailors survive the storm? This story’s conclusion is up to the listener,” said Ware, who will also be playing in the Wind Ensemble.

“I have the unique opportunity to perform in the premiere of my piece,” said Ware. “I am extremely excited and thankful for the honor of having my piece premiered by this amazing ensemble.”

The Wind Ensemble concert is free to the public.