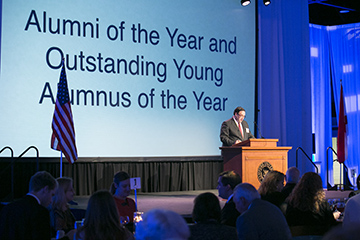 The deadline for nominations is Friday, May 27.

The inaugural Humanitarian of the Year Award will be presented to a Samford alumnus who has lived out the Samford motto, “The world is better for it,” through selfless work to better the lives of others. To be eligible, graduates must have completed at least one Samford degree.

“The Humanitarian of the Year Award is meant to honor Samford alumni who tirelessly live out Samford’s motto in their daily lives, and who normally receive little to no recognition for their work,” said Senior Director of Alumni Programs and Annual Giving Lauren McCaghren.

Service is a cornerstone of the Samford’s mission, and the addition of this award is particularly meaningful given that Samford will celebrate its 175th anniversary this year.

Receiving one of these awards is the highest form of recognition a Samford alumnus can receive from the university. Recognition can be made for lifetime achievement or for a significant achievement during the pervious year.

Nominees for Alumnus of the Year should be distinguished in their professional careers, community and church involvement, and in their ongoing service to and financial support of Samford. To be eligible, graduates must have completed at least one Samford degree at least 15 years prior to selection (2001 or earlier).

Nominees for Outstanding Young Alumnus also should be distinguished in their professional careers, community and church involvement, and in their ongoing support of Samford. To be eligible, graduates must have completed at least one Samford degree within the last 10 years (2006 or later).

A list of previous recipients can be found at alumni.samford.edu/alumniawards.

Nominations can also be submitted in writing to the Office of Alumni Programs, 800 Lakeshore Drive, Birmingham, AL 35229.