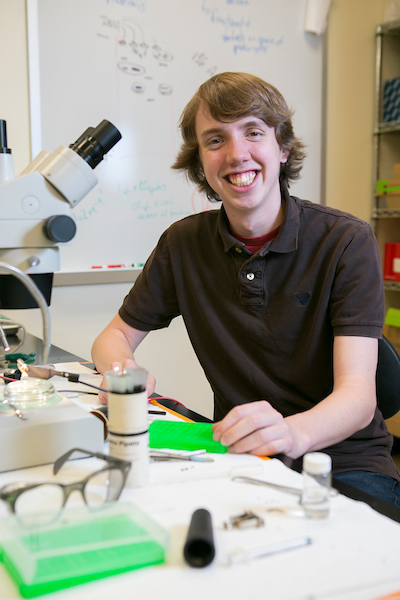 Senior Samford University biology major Jeff Cole of Cedartown, Georgia, can’t recall all the reasons he chose Samford, but he can tell you the big one. His father, Tim, a pastor who favored Samford, died as Jeff was making his college choice. His father’s influence and the prospect of being only two hours away from his mother, Diane, pointed him to the Homewood, Alabama, campus.

Cole spent many hours of his freshman year on the road between Samford and home, wringing every ounce of life from his 1989 Jeep Comanche. He also discovered a road that would lead him places he never imagined going.

Cole found good opportunities at Samford for his proposed field of study, marine biology, but ran into a couple of problems. “Come to find out, I get seasick, and I’m not that great at swimming,” he laughs now, recalling how his interests shifted. “I was still interested in research, but I realized that marine biology might not be for me.” He found important new reasons to stay at Samford.

“Jeff is a brilliant student with the drive and passion to be a truly exceptional scientist,” said Samford biology professor Betsy Dobbins. Cole had a freshman biology course with Dobbins, and then worked with her on a water quality research project the next summer. She was impressed. “Curious, quick to learn and adaptable, he gathered water samples and macroinvertebrates from awkward locations in daunting heat with genuine good humor,” Dobbins said. “He was so proactive that when I suggested that he become familiar with the adult body types of the aquatic nymphs we might see, Jeff spent the weekend making a photo guide and learning every adult dragonfly and damselfly in Alabama.”

The fieldwork with Dobbins presented some exciting new possibilities, which Cole pursued in Samford’s Research Experience for Undergraduates (REU) program the next summer with another important faculty mentor, Drew Hataway. The work, focused on spiders, sparked an interest in the creatures, and in the disciplines of computational biology and genetics. When Cole’s data for the project became very complex, he taught himself how to use special computing software to complete his analyses. “Jeff is the most dedicated undergraduate researcher I have interacted with throughout my career,” Hataway said. “What he has overcome to achieve is staggering, and more impressive is what he has achieved up until this point.”

The mentoring and opportunities to research alongside his professors helped Cole earn a place in a summer REU program at the University of Kansas. There, he learned new techniques and refined his interests toward protein evolution, especially the evolution of spider venom. When he returned to Samford, he combined all of these experiences and interests for a senior research project.

As Cole was completing that project, presenting his research at conferences and choosing a graduate program, his mentors encouraged him to apply to the prestigious National Science Foundation (NSF) Graduate Research Fellowship Program (GRFP). Those fellowships are rarely awarded on a first application, but his professors knew Cole was a good candidate, and they thought the process would be instructive. Cole learned in late March that he has earned the honor, which will pay for three of five years of his graduate education. That means he won’t have to work part-time jobs to pay the bills.

Savings from his REU stipends helped Cole replace the Comanche with a used Camry, and this fall, that will carry him to graduate school at East Carolina University, where top researchers have a lab dedicated to the study of venom. Hataway expects Cole to fill his first years away from Samford with publications and other contributions to his field and knows well how the student will enrich the lives of those he meets. “Jeff’s work ethic, humor and drive have made him loved by his peers and faculty,” Hataway said.

After graduate school, Cole hopes to continue his research at a university with a lab of his own, but he also wants to create relationships that recall the transformative experiences of working alongside his Samford mentors. “Sometimes, I may not have the easiest time recollecting why I came to Samford, but I definitely think the reason I ended up staying was the great relationships I had with the faculty here,” he said. “You’re really able to be one-on-one with professors here.”